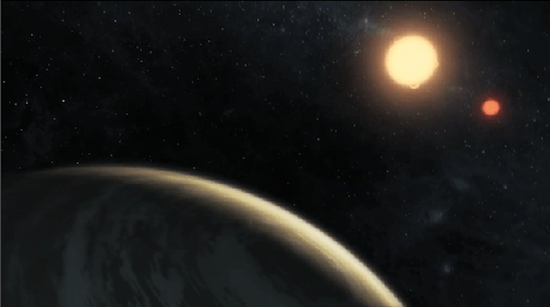 Astronomers have discovered the first planet that orbits two suns, like any science fiction anything tends to use for a backdrop on an alien planet, painted across the sky. Detected by the Kepler telescope, the planet is comparable in size to Saturn, and orbits a binary pair, one star of which is 1.5 times smaller than our sun, and the other is 4.5 times smaller than our sun, and they orbit each other every 41 days. The orbiting caused brightness dips that Kepler discovered, but Kepler also saw an additional dip in brightness caused by the Saturn-sized planet traveling across the stars every 229 days.

The binary stars and the planet orbit in the same plane, which researchers think suggests that they were formed together from a single spinning disk of gas and dust. Previous to this discovery, astronomers weren’t sure if planets could form around binary stars, but now they’ve made every writer’s science fiction just a little bit more nonfiction. Interestingly, due to our slowly changing view of the system, we won’t be able to see the planetary transits for 24 years, between 2018 and 2042. Check out an animation of what he orbits might look like over on Science Mag.