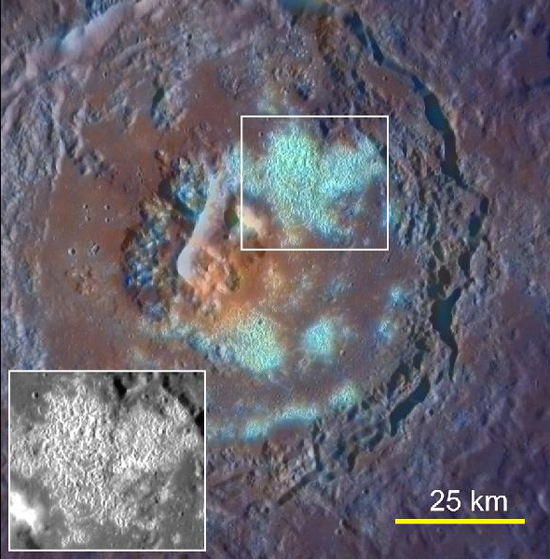 When NASA launched the MErcury Surface, Space ENvironment, GEochemistry and Ranging satellite (or MESSENGER, demonstrating some truly hamfisted government acronym crafting) in 2004, Mercury has a pretty low profile in planetary science. For years, the innermost planet was assumed to have a quiet, boring life and was thought to be similar to our own moon. But after a mere six months in orbit around the planet, MESSENGER has produced enough information for a whopping seven papers published in the magazine Science that soundly dash those hum-drum expectations.

With this new information, the MESSENGER probe is forcing planetary scientists to reassess their assumptions about the planet’s volcanic history, geological processes, magnetic field, and overall composition. The principal investigator behind the project Sean Solomon, of the Carnegie Institute for Science, described it thusly: “In the history of exploration of our planetary system, the first spacecraft to orbit a planet has always yielded stunning surprises, and MESSENGER has been true to that pattern.”

The first high-resolution imaging of Mercrury has yielded several surprises. Scientists found that the planet has a volcanically active past, with flood zones of dried lava covering 6% of the planet’s surface in huge, smooth plains. Most of the lava, which is tremendously thick in some areas, seems to have a come from a series of 16-mile long volcanic vents. It’s possible that this kind of volcanic activity could be analogous to the formation of our own planet, perhaps giving insight to a period of Earth’s history which is now difficult to investigate.

Imaing also shed new light on curious “hollows,” which are depressions on the planet’s surface that appear brighter than the surrounding surface and cyan in color. The hollows have been observed in previous flybys, but this is the first time scientists have had a chance to see them in such detail. Surprisingly, the hollows appear to be not only common across the planet, but some seem to be relatively young. This raises the possibility that they were created by a previously unknown geological process that is ongoing on Mercury.

Additionally, scientists were able to get a better idea of the composition of the planet and found far more potassium and sulfur than previously assumed. This is significant since these elements vaporize at relatively low temperatures, ruling out a hot and cataclysmic past for the planet — which many models for the planet’s formation had called for in order to explain Mercury’s unusually high mass.

Lastly, data from the MESSENGER probe gave researchers their first close up view of the planet’s magnetic field which is apparently completely unique in the solar system. It seems that the planet’s weak magnetic field does not create Van Allen Radiation Belts in the same manner as other planets, and it also has a magnetic equator much further north than was expected. The data also presented evidence of sodium auroras on the planet, from NASA:

The team found that sodium is the most important ion contributed by the planet. “We had previously observed neutral sodium from ground observations, but up close we’ve discovered that charged sodium particles are concentrated near Mercury’s polar regions where they are likely liberated by solar wind ion sputtering, effectively knocking sodium atoms off Mercury’s surface,” notes the University of Michigan’s Thomas Zurbuchen, author of one of the Science reports. “We were able to observe the formation process of these ions, one that is comparable to the manner by which auroras are generated in the Earth atmosphere near polar regions.”

Data from the planet also found helium ions in the magnetosphere, presumably created from interacting with the sun’s solar wind. The scientists also note that their observations have confirmed that the weak magnetic field of the planet provides little protection against the damaging effects of solar wind and extreme space weather.

Though currently seven years into its mission, the probe has only just begun studying Mercury. Given the incredible information pouring back from the probe already, we can only imagine what the coming months and years will tell us about the surprising planet closest to our sun.