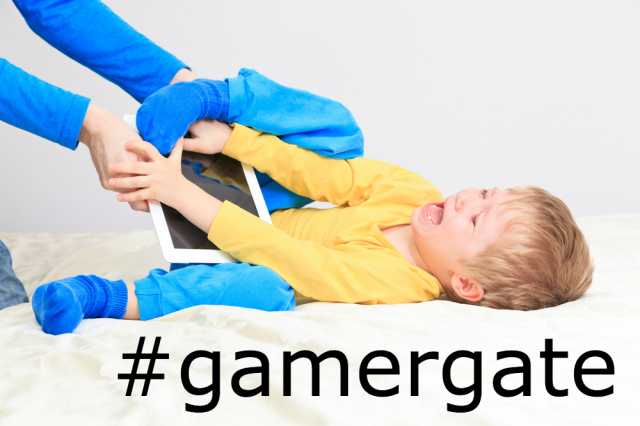 Over the last two months, the Gamergate movement has consistently harassed women out of both the gaming industry and their homes. After Anita Sarkeesian was forced to cancel a speech in Utah due to terror threats, she called for the media and the gaming industry to take a strong stance against the “movement” – and now, some of gaming’s biggest players are taking up the charge.

The Entertainment Software Association, better known as the ESA, is “the U.S. association exclusively dedicated to serving the business and public affairs needs of companies that publish computer and video games for video game consoles, personal computers, and the Internet.” Each year, the ESA publishes essential facts about the gaming industry; this year’s fact sheet included interesting tidbits like:

Today, a spokesperson for the ESA told The Washington Post in a statement that they believe the harassing actions of Gamergaters need to be stopped:

“Threats of violence and harassment are wrong. They have to stop. There is no place in the video game community – or our society – for personal attacks and threats.”

Additionally, Kate Edwards, the executive director of the International Game Developers Association, has also spoken out against Gamergate, saying:

“The irony of this movement is that they want journalistic integrity, but are looking to squash the voices of women at all costs. The logic is completely lacking.”

Edwards added that the industry is partially to blame for the current environment, since “the industry has catered to that [demographic] in their marketing.” Edwards said the Gamergaters are “out of touch. The whole community, the world around them has changed, but they think that’s not the case.” She also mentioned that we all have to support women in tech at all times, and that perhaps the only good thing to come out of Gamergate is it has “tied developers together.”

There are many members of the “movement” who truly believe Gamergate is supposed to be about journalistic integrity, and decry the harassment of women in the industry. But the fact of the matter is, the unfortunate and unavoidable side effect of aligning themselves with a hashtag founded around the character assassination of a female game developer is that their motives and message will consistently be clouded by the violent, vitriolic actions of the worst amongst them.

I’ve said it before and I’ll say it again. If you truly believe harassment and threats are wrong, drop all connections to the Gamergate movement and take up your “corruption in journalism” cause elsewhere.

[UPDATE: For those concerned that the ESA’s comments were not a direct reflection on Gamergate, this is from the journalist who took their statement:]

At the risk of repeating myself: I asked for a statement on GamerGate, by name, for that story. Thanks for your comments!