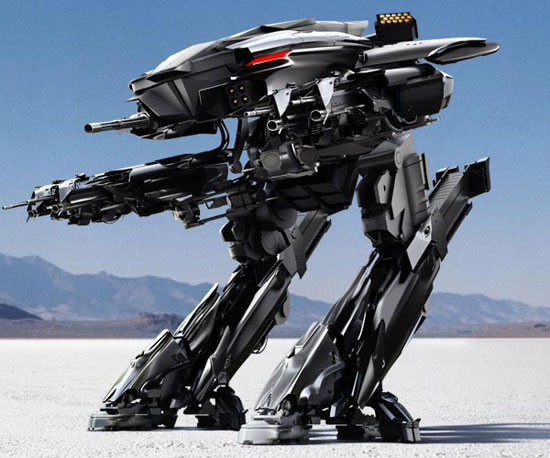 In what is quite possibly the most important news about the forthcoming RoboCop reboot, the bipedal stair-hating mech ED-209 has been confirmed in the cast. So far, ED-209 will be the only cast member from the original 1987 film and will join Joel Kinnaman, Gary Oldman, Samuel L. Jackson, and Hugh Laurie in the 2013 reboot of the franchise. This is a happy day.

ED-209 appeared briefly in a viral video from the fictional Omnicorp, alongside an aerial drone and a few tantalizing hints of the RC-2000. I’ll give you three guesses as to what “RC” stands for, but you should only really need one.

While I am still hesitant about a re-imagining of the near-perfection that is RoboCop (1987), the presence of ED-209 is extremely comforting. True, this iteration of the notoriously clumsy and heavily armed robot is all weird and angular, looking like the unholy spawn of a MechWarrior Marauder and a 70’s-era Cylon as imagined by a C-grade graphic designer working on a custom PC desktop background, the point is he’s there.

That’s really all I wanted.