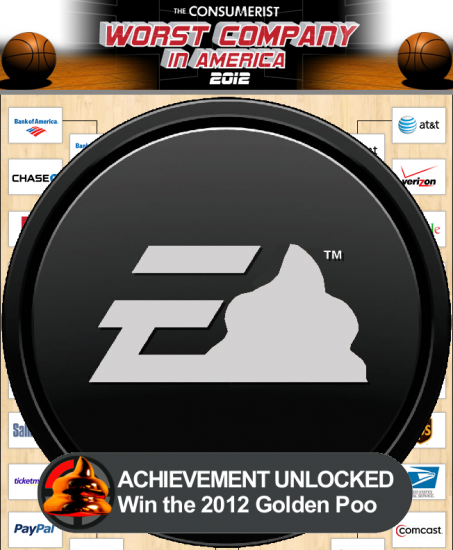 The consumers have spoken. Electronic Arts, better known by its nickname EA, is the Consumerist’s Worst Company in America for 2012, as voted by users. For those of you who are familiar with EA, this probably isn’t a huge surprise, EA’s Origin platform is widely considered to be garbage, their DLC policies seem pretty greedy, and there are more customer support horror stories than you could ever care to hear. All that aside, EA makes video games, yet still beat out companies like Facebook, Apple, and in the final showdown, Bank of America, companies that stand accused of stealing your personal information, utilizing large amounts of sweatshop labor, and stealing your money or even your home, respectively. How could EA compete with that?

There are a couple of reasons, and while in the end you might not agree that EA could ever accomplish anything as bad as Bank of America’s illegal and mistaken foreclosures, you can at least make a little sense of how this vote came out the way it did.

Normally, you’d think that this would result in EA getting cut more slack and Bank of America being cut less. After all, when you’re dealing with something as important as protecting and preserving all the money you have, you’d think that you’d be especially sensitive to poor business practices, more sensitive than you are about games. It seems it’s the other way around, and if you really think about it, it makes complete sense.

Take nickel and diming, for example. One of the biggest beefs with has to do with things like Day 1 DLC, which is arguably similar to selling games piecemeal at inflated prices. Consider it an extra fee, if you will. Wait, extra fees? That sounds like a banking thing! In fact, that’s a critisism of Bank of America — and plenty of other banks — but Bank of America fees are higher than DLC prices, so what gives? To put it simply, you shell out $60 to buy a video game and then have fun; you open a bank account even though it can be a pain because you have to. When your expectedly fun video game experience comes part-and-parcel with hidden fees, you get upset because you feel like your potential fun is being stolen from you. When your expectedly annoying bank experience involves extra fees, it’s just more of the crap you were expecting anyways. It’s a little harder to get indignant because you weren’t really expecting to have what might be considered a “good time.”

Gaming is a social activity increasingly built around online play; Banking is banking.

The decision of Worst Company in America for 2012 was decided by a reader poll. I mean, that pretty much sums it up right there. That is to say, this isn’t an in-depth judgment; it’s more about which company can rally its anti-fans into a more spiteful ardor. EA had the distinct (dis)advantage of having a vocal, Internet savvy group devoted to hating them. Bank account holders are less of a tight-knit group.

Considering that the voting system here was a little bit less than scientific, you have to attribute a lot of it back to the ability to get fired up, and a lot of getting fired up is mindlessly talking to people who agree with you and agreeing with them in a sort of emotional echo chamber. In a word: Circle jerking. That’s not to say these companies don’t do bad things, but talking about how you hate Company X with other people who hate Company X will get you fired up enough to shout “VOTE X!!!!” from the rooftops, or Twitter. Whichever really. Gamers could go do that on forums, or reddit, or any number of Internet locations built exclusively for them to talk to each other. People who hate Bank of America? It’s a little tougher to find a good bashing forum.

That’s not to mention that gamers are pretty much heavy Internet users by definition. Bank account holders, not so much. That can pretty seriously skew who’s voting and even who is aware of the vote. You can bet that links were plastered all over gaming forums.

Banking is pretty complicated. Buying a game and then being happy, or not being happy, is considerably less so. Okay, so maybe putting money into an account and then taking it out isn’t that hard, but there is a lot going on behind the scenes that you probably don’t understand and that you know you probably don’t understand. Whether you’re talking about the logistics of a mortgage and what a title transfer actually involves, or you’re trying to trace the reasoning behind various fees through a maze of fine print, it’s confusing and you know it’s confusing because you’re confused. Confused yet?

With a game on the other hand, you buy it and it either pisses you off and or it doesn’t. The framework of the game, the complicated parts, the analogue to a bank’s fine print if you will, isn’t in front of you. It was over and done with months ago. You don’t get to see it. You just see a pile of awesome, or a big batch of suck and those are easy to recognize. If a bank slaps you with a fee, maybe you missed something in that fine print you were supposed to read, or even if it is unfair, it might be hard for you to articulate why or how it’s unfair. If a game sucks, it probably just sucks, and that sucks.

Also, it’s worth noting that your average gamer has played more video games than your average bank account enthusiast(?) has had bank accounts. Gamers will have played a good game they can use as a measuring stick, probably several. “These clipping issues are insane. I’ve played dozens of games where this wasn’t an issue.” With a bank accounts, you may not know better. Is the size of that overage fee Bank of America being evil or just the reality of banking?

Bank of America isn’t the only place you can get a bank account; EA is the only company making EA games.

This is probably the biggest factor. A bank account from Bank A and a bank account from Bank B are arguably perfect substitutes. They both accomplish the same thing. An EA game and a thatgamecompany game are not. If Bank of America screwed you over (and it’s not life-destroying) you can go somewhere else. If Mass Effect 3 sucks, playing Journey won’t fix the problem; Mass Effect 3 still sucks. You could argue that so far as aiming to amuse you, all games are the same. But then so are all movies, and all music. Tell me that all bank accounts are the same and I might be more inclined to believe you.

Now, none of this to say that EA isn’t a bad company. I’m not much of a fan myself. It’s also not to say Bank of America isn’t a horrible company either. I don’t feel that fit to judge because, after all, I am aware that I hardly know anything about banking. It’s just to say that whether or not EA is the worst company in America this year, it completely makes sense that they won an open poll on the subject. But let’s not direct all the anger at them, Okay? Just look around you, there are plenty of things to hate.

(image via The Consumerist)

Bank of AmericaConsumeristEAWorst Company in America