Every now and then, you hear the old “can video games be art” discussion pop up, and as times goes on, the answer becomes more of a resounding “yes, stop asking,” than something more nebulous. From the very first moment Thatgamecompany’s downloadable PlayStation Network adventure Journey was shown off years ago, the video game world knew it would be one of those “art” games. It finally released to the masses on March 13, and not only is the game one of the best examples of video games as art, but it’s one of the industry’s finest instances of gaming.

The last in a three game contract developer thatgamecompany has with Sony, Journey is wildly different from their first two offerings, flOw and Flower, two relaxing, meditative style games, the former of which resembling Snake but with amoeba-like creatures, and the latter more difficult to describe, a kind of much more abstract version of Snake. A stark departure from the first two games, Journey focuses on the titular journey of a robed figure across a large, mostly barren desert. The robed figure, who I’ll now refer to as what I called the androgynous character throughout the game, “Little Fella,” has one goal: Get to the mountaintop in the distance. Simple objective, but one of the best journeys in gaming a player can take.

Throughout the quest, players will navigate Little Fella through a ridiculously gorgeous, mostly desert landscape. Little Fella encounters different areas, cordoned off from the previous and upcoming area by a gate which must be activated through a burst of song. Each area allows free roaming exploration, but is home to one main puzzle, which upon completion grants Little Fella access to the gate to the next area. Journey handles the areas’ puzzles similarly to artsy iOS hit Superbrothers: Sword & Sworcery, in that each puzzle must be solved in a certain way, but the method used per puzzle isn’t quite used again — diverging from the usual path most video games take, teaching a new skill then making the player use it throughout the rest of the game in a variety of ways. 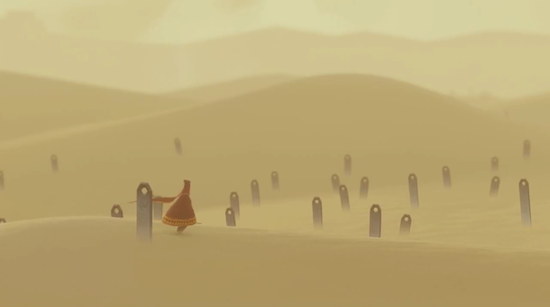 Players only have a few commands at their disposal. Move, a jump-fly-glide combination, a camera swing, and sing, with sing being the “activate” button, and the jump-fly-glide action requiring use of scarf points (read: action points represented by symbols displayed on Little Fella’s scarf). Players must use these commands to navigate Little Fella across each area toward the ultimate goal of the glowing mountaintop in the distance.

To say Journey is reminiscent of a religious trek would be something of an understatement. The game doesn’t shove any kind of religion or specific religious ideals down players’ throats, but encapsulates broad, basic themes of a higher power and the journey toward self discovery and motivation to which most religions adhere. Even the ending, a trope not infrequently used in various forms of entertainment, speaks to both the journey one takes down the path of faith and self discovery, and efficiently, effectively, and more than satisfyingly wraps up the adventure.

Due to the theme of self discovery and motivation, Journey employs the use of wandering in isolation. To discover that thatgamecompany has fans of Shadow of the Colossus working on the team wouldn’t surprise anyone. However, whereas Shadow of the Colossus strengthened the game’s sense of isolation through a humongous, barren wasteland with the ruins of past habitation, Journey uses isolation a bit differently, and as (if not more) effectively, via two mechanics. 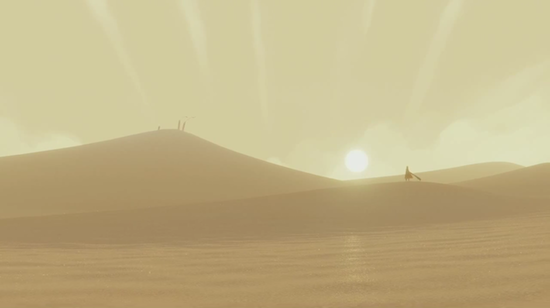 The first is the aforementioned sing command. Players can make Little Fella sing anywhere, not just when the game requires something to be activated, and based on speed and length of button presses, and the current area in which Little Fella sings, a seemingly random note is generated. So, as Little Fella treks across a lonely desert with nothing to do but gawk at the gorgeous scenery until arriving at the next puzzle, players will find themselves playing with the sing button, creating unique songs. The effect of Little Fella singing songs full of melancholic tones while walking across a lonely desert is nothing short of powerful, even more so because the player is pressing the sing button for the same exact reason Little Fella would be singing on an isolated trek through the desert: Singing keeps Little Fella going through the lonely trek, and making unique songs keeps the player going in between puzzles.

Aside from the singing, Journey ramps up the isolation in such a unique way, that it is one of the most profound experiences in gaming. Throughout the journey, provided there is an established Internet connection, players will randomly run into another robed figure on their own journey to the mountaintop. 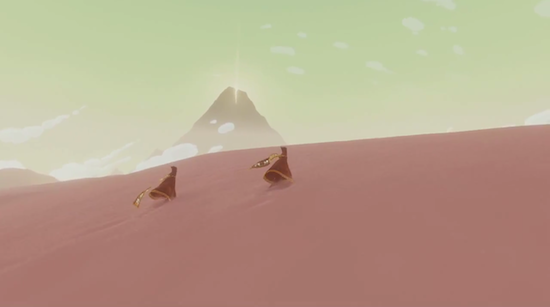 Players do not get to choose who they pair up with, nor can they directly communicate, and are required to use movement cues and — you guessed it — the sing button. During my playthrough, I met at least ten other unique players (a trophy informed me of this), and each one provided a unique, worthwhile experience. Standing close to another robed figure recharges Little Fella’s scarf and causes the pair to glow, but that’s about as standard as the multiplayer experience gets. During one area, my companion didn’t feel like exploring, solved the area’s puzzle, and left me alone in the desert. My next companion, however, followed me around everywhere I went, standing atop desert vistas with me as I swung the camera around, taking in the view. At one point in the game, while traversing through an underground area, my companion and I trekked side-by-side, dodging hulking monsters that ripped our scarves to shreds when were caught, and hiding underneath crumbled ruins. As I reached the end of the area, my companion was nowhere to be found, though a faint glow on the side of the screen let me know he (she?) wasn’t gone. I went back through the subterranean area, dodging the humongous monsters once again until I came across my companion, who was frantically singing in order to catch my attention, standing next to a power-up that would grow my scarf in power. She (he?) was risking their own lengthy scarf just so I could grow mine a little more. 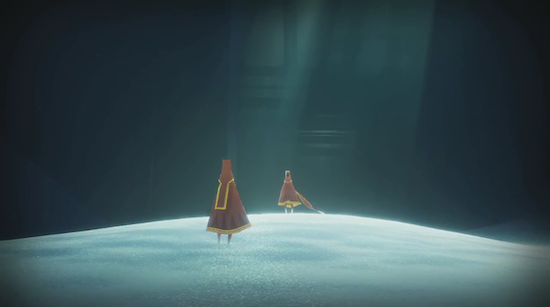 During the latter half of the game, when the sparkling desert sand is replaced by gloomy snow higher atop the mountain, (spoilers ahead), the snow freezes all cloth, and thus our scarves, preventing us from using our jump-fly-glide maneuver. Singing, however, breaks the ice for a brief moment, so as my companion and I trekked up the lonely, snowy mountain fighting the cold, heavy wind, we both sang songs, keeping each others’ scarves free of ice, and setting a dreary tone to the already gloomy snowy mountain with our melancholic notes. The higher we got, the harsher the climate became, and the less energy our Little Fellas had — our movement speed drastically slowing, our red robes freezing over, and our songs becoming more faint as we continued. My companion was slightly ahead of me as we got closer to the summit, and our Little Fellas were almost entirely frozen over at that point, hardly able to move, the sing button barely producing any sort of sound. Due to my companion being slightly ahead of me and triggering the sequence first, he (she, it?) collapsed into the snow, almost instantly buried with the help of the wind. I tried to sing out, but the button wasn’t producing sound anymore, and as I navigated over to my companion, seemingly lifeless half-buried in the snow, Little Fella collapsed into the snow as well, adjacent to the robed figure that risked his life to make sure I got that scarf power-up. I was legitimately heartbroken. That isn’t the end of the game, though, so don’t worry. (spoilers end).

The brilliant gameplay, absolutely stunning art style and graphics, and a score that is nothing short of incredible, isn’t even the total of Journey’s brilliance, as impressive little touches and attention to detail are stuffed throughout the adventure. Little Fella’s idle animation, for one, is one of the most appropriate, impactful idle animations found in all of video games. Rather than look around, or kick some sand, or oddly sway in one spot like other video games have their characters do, Little Fella sits down into the desert sand or mountain snow, the red parka reminiscent of some sort of lost desert totem. Not long after, the wind begins to cover Little Fella in sand or snow, creating a heavy scene where it looks as though Little Fella has given up on the journey. Thatgamecompany has even taken great detail with the pause screen: Rather than a simple “PAUSE” plastered over the current scene, the game shifts to orchestrated panoramic views of the current area. And like any good game, the music is contextual, picking up at the right moments and dying down when appropriate.

Though Journey is short, around two to three hours with full, methodical exploration of each area, it is priced as such, only $15, a couple bucks more than a ticket to a movie that wouldn’t provide the replay value, or even as great of an experience as Journey provides. Not only is Journey definitively art, but it is one of the best games I have ever played. Those only concerned with games that involve some sort of kill:death ratio, or ones where you can racially slur at other 12-year-olds over voice chat need not apply, but anyone looking for a meaningful, moving, beautiful experience couldn’t do much better than Journey.