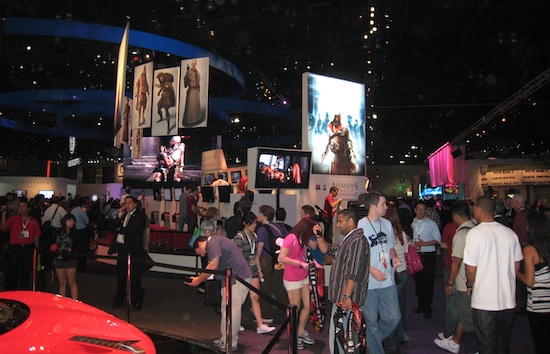 It’s been a wild ride at my first and hopefully not last (anybody in the media want to hire me?) Electronic Entertainment Expo. I got to play a ton of great games and it feels strange knowing that I won’t be able to play unreleased titles when I go back to real life. I anticipate a severe withdrawal period and a whole lot of checking and rechecking release dates for everything I saw at E3 that I now can’t wait to own.

But it wouldn’t be a real day at E3 if I didn’t add some more games to that list of must-haves. Here’s a rundown of everything that I played today, from the great to the greater.


The Sims 3 for Consoles

The Sims 3 is set to be the first Sims game to make the leap to mainstream consoles, and it looks like they’re even making some improvements along the way. Don’t worry, your favorite customization tools will still be fully intact, from sim customization to building houses and selecting furniture patterns. The big new feature for the consoles version is “karma powers,” where those who reward their sims’ wishes will gain magical powers ranging from automatically making your sim happy to raining fire down on its house. The fact that The Sims 3 is moving to consoles is notable in that it actually could add to the already gigantic horde of Sims game fans. Not every gamer has a PC set up for gaming.

There was a brief demo of Mafia II available on the floor, but it was actually quite impressive. While it started out with a pointless drive to the mission destination, the actual gunplay was refreshingly realistic. There’s no health bar and you can’t take that many shots. If you run into the middle of the fray, you will be gunned down fast. It’s all about taking cover and making each shot count. Of course, the rate of recovery is unrealistic. Gunshot wounds don’t just go away when you wait behind cover for thirty seconds. But Mafia II is more believable than most games, and the graphics are impressive to boot. It’s not my kind of game, really, but those who enjoy the Grand Theft Auto mold will love this.

The upcoming game in the Final Fantasy series will be a Massively Multiplayer Online game, which led to an unconventional demo. I started in character creation, which has been expanded a little bit since the last MMO Final Fantasy game. More importantly, Final Fantasy is overcoming one of the greatest MMO flaws by not restricting its players to their starting class. Apparently, there will be some sort of system which is still in the works that will allow players to change class based on the items they have equipped. The graphics were impressive though a bit grainy even in 1080p, and the 3-D version was disorienting. While interactions with people and objects is more streamlined, it’s difficult to keep track of where your enemies are and get close enough to attack. This is largely due to the awkward camera controls. The game is just starting to enter beta, though, so there’s plenty of time to streamline.

I got really addicted to this game. I’m not one to get right back in line for something after my turn, but I did with this. Brotherhood is a full sequel to Assassin’s Creed II, complete with a full-length single-player campaign full of digital assassin goodness, but the demo was something completely different. Multiplayer? In Assassin’s Creed? Lolwut?

Yes, there is multiplayer, and it’s just brilliant. Eight players entered the virtual Italian village with someone they had to kill and someone trying to kill them. The goal is to kill without being detected, either by your attacker or your victim. Bonus points for especially discrete or awesome methods of killing. There’s an unbelievable degree of strategy built into this simple game mode. This game is worth purchasing just for online play, let alone the single-player campaign that’s sure to be just as fun.

I had no idea what this game was when I got to E3, but I kept hearing about it and it was among the first games to get nominated by a bunch of organizations for “Game of E3 2010.” So I walked up to the booth and just barely got a spot to see a demonstration of the game.

Bethesda Softworks, the company behind the Elder Scrolls and Fallout games, brings us this shooter that is markedly in the same vein as Fallout, but seems to go even above and beyond. RAGE takes place after a meteor hits Earth, causing mutants and devastation. Your goal is really to survive, but you eventually uncover many mysteries that the demo team dropped hints for while still coyly not revealing much. Suffice it to say, the mystery likely involves some combination of the following words: Robots, aliens, dystopia, shadow government, conspiracy, anarchy, big brother.

But the real highlights of the game were the environment and the amount of choice in item and weapon use. The environments are incredibly diverse, from a Firefly-esque western/Asian town to a desolate yet modern-looking former metropolis. And they’re all beautiful. With weapons and items, you can choose from a ton of guns, each with several kinds of ammo with different pros and cons, and you can engineer items on the spot to help you out. The coolest item we saw created was a little sentry spider robot that ran into a horde of enemies to flush them out and even kill a couple. And the enemies vary along with the locations.

RAGE is going to be an amazing game. It may be more linear than players expect from Bethesda, but that’s not always a bad thing. It looks awesome and I can’t imagine it isn’t going to be extremely fun to play, and quite challenging too.

If I HAD to pick winners.

I stand by the fact that the 3DS was the best thing at the conference, despite everyone’s complaints that you have to look at the screen from a specific angle. Really, just tilt the machine if you need to move your head. Boy, gamers can be lazy bums sometimes.

But every media outlet and their mothers are picking a best game of E3, so I figure I may as well jump on the bandwagon. Now I didn’t get to see everything, so let’s keep in mind that this is both a slightly uninformed choice and also one based greatly on my personal gaming preferences, but I’m going to pick The Legend of Zelda: Skyward Sword as my favorite. The way that it uses the capabilities of the Wii to really put you in the role of Link is just unmatched by any other game’s control scheme. It felt even more real to me than Kinect, where my body literally was the controller.

Plenty of other games were great, especially RAGE and Kirby: Epic Yarn, which would take second and third respectively, but Zelda sets a new standard for immersive game controls.