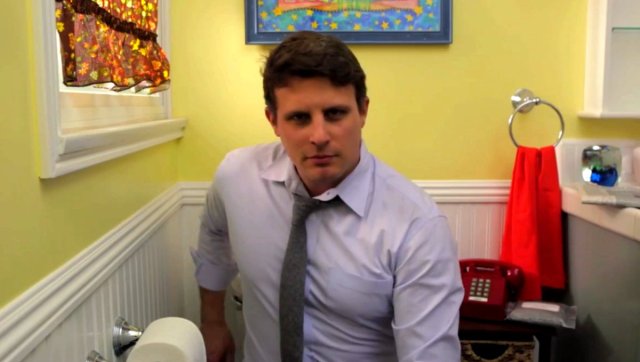 Last year startup Dollar Shave Club launched to bring cheap razors to your door every month. A mail-order razor service is a good idea, but it really caught our attention because of the launch video. It let everyone know how “f**king great” DSC’s blades were. Now the DSC is moving into a new market — butt wipes. As we’ve come to expect, their video for new One Wipe Charlies is also pretty great.

The video has DSC founder and Upright Citizen’s Brigade-trained comedian Mike Dubin explaining the new product. It also has a bear and an awful lot of poop jokes. See for yourself:

DSC has already grown to 200,000 active members with their razor, so they think it’s time to dominate the entire bathroom. What better way to do that than to get a piece of the $9 billion a year toilet paper business? After all, as Dubin says, “More people wipe butts than shave.”

Dubin seems like a savvy businessman, so he didn’t jump into the wipe business without being prepared. DSC asked 1,000 men in a survey about their wiping habits, and found that 51% of them use wipes, but that 23% are embarrassed by it. Having wipes mailed directly to your home seems like a pretty good way to overcome that embarrassment.

A 40-pack of One Wipe Charlies will cost members of Dollar Shave Club $4, and it looks like they’re being offered to members only. I’ve been on the fence about joining DSC for a while now. This could finally get me on board.