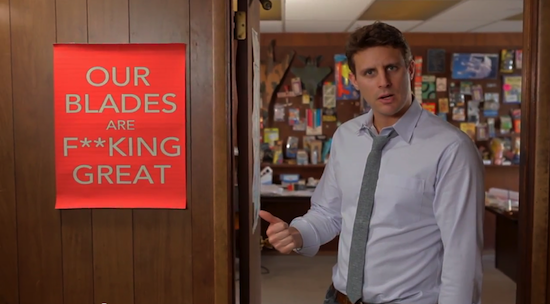 “Our blades are fucking great.” That’s the line that first grabs viewers when they watch the video for the Dollar Shave Club, and it was what I couldn’t resist goading the company’s co-founder Mike Dubin with when I spoke with him. I feel a little bad about that. Anyway, the Dollar Shave Club is looking to revolutionize how you shave your face (or legs, or whatever you want) with the same kind of disruptive startup sensibility that has defined the tech industry.

Like so many web-based startups, the Dollar Shave Club already had a great idea. But what catapulted the company into the public eye was a damn funny video featuring Dubin swaggering through a warehouse as he explains the advantages of the razor club. Dubin, who studied standup and improv at the Upright Citizen’s Brigade in New York, said, “this is the first time I’ve integrated my comedic training into a brand that I’ve built.”

And it’s quite an intriguing brand. Here’s the gist of it: You pay a low monthly fee and once a month fresh razor cartridges are delivered straight to your door. “We’ve got a great product and a great delivery system,” says Dubin. “We’re just trying to bring that to the people.” The company certainly thinks they’ve got a great product, and simply glancing over their array of products is enticing. One dollar, plus shipping and handling, gets you five two-blade cartridges a month. That’s 60 cartridges a year — a pretty unbeatable price.

Though their company shirks the idea of bells-and-whistle shaving, it does offer four four-blade cartridges for $6 per month and $9 per month will get a three six-bladed “executive” blades a month. And it’s not just cheap, lazy men that the Dollar Shave Club is going after — though that is a thrust of their video. Dubin says that women are particularly fond of the four-blade model.

How the company is able to provide this service is fairly straightforward. While Dubin’s background is in digital marketing, his business partner Mark Levine has over 25 years experience in product manufacturing. Levine had the know-how to work with overseas distributors to get the company its own razors from overseas manufacturers. So forget Gillette and the others; when you roll with the Dollar Shave Club, you roll all the way.

Of course, that’s not to say that Dubin and his company are waging a one-company war against facial hair. “We’re fans of the beard, we like facial hair,” he said. Given our readership, he suggested that geeky goatee owners could still benefit from the Dollar Shave Club. “I would say that our razors are great for carving tight edge around that facial hair.”

This includes those of you who, “work in t-shirts and sit on bean-bag chairs; whatever!” He continued, “rock the facial hair.”

Though Dubin and his partner saw a clear niche for them to work with, he says that the company started — as so many do — with anger. “I think the average guy is pretty frustrated with the price of brand name razors,” said Dubin. It was this shared frustration between Dubin and Levine that first spawned the idea to start the company. They’re banking on that frustration to make their subscription club for shaving take off. Their video has been viewed over 3 million times, and has over 34,000 likes, so maybe they’re onto something.