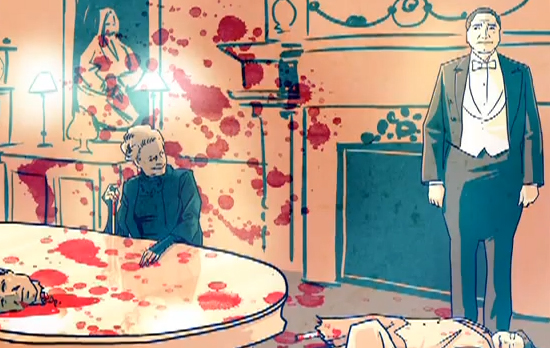 Americans are fascinated by British culture — Anglophiles are rampant and often in control of television channels — but you know what we are also fascinated by? The animate dead. They’re kind of like chocolate or Nutella, improving anything with their inclusion, and Quirk Books has shown us that zombies could even make Jane Austen palatable with 2009’s release of Pride and Prejudice and Zombies. Now folks have done one better. Writer Rob Kutner (of Conan) and illustrator Kody Chamberlain (30 Days of Night) have vastly improved the show Downton Abbey by bringing the dead back to life with their “Downton Zombey” video.

Now, if you’re a fan of Downton Abbey — not that there’s anything wrong with that — don’t be offended. Your show just got better is all.

Here it is. Enjoy! There may be some mild spoilers involved in Season 3, but so what? That’s the thing about adding zombies. Dead characters that you miss can come back. Yay!

Don’t get me wrong. I’ve actually seen a few episodes of the real show. The acting is great and I generally enjoy period dramas that depict class struggle, gigantic English country estates, and lots of tea-serving. It’s entertaining for what it is, and it’s worlds better than the Spanish soap operas I’ve been subjected to by my in-laws. But it would be thrilling, wouldn’t, if zombies were really added to more English and Spanish programming?

Note: As awesome as this “Downton Zombey” video is, it’s still a notch or two below the brilliance of Sesame Street’s “Upside Downton Abbey.”