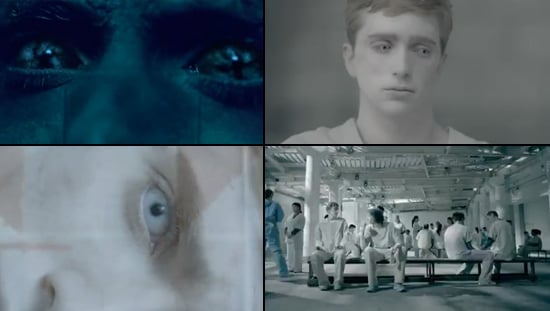 First there was The Office, then Being Human, then Sherlock, and with each successful BBC series, the Americans had to have their own version. But sometimes, like the dead rising from the grave, a long-established pattern goes in reverse. This time, the BBC is taking a cue from the success of AMC’s The Walking Dead and trying their blood-spattered hands at a zombie-based television series. Called In the Flesh, it airs on March 17th on BBC Three. Far from an adaptation, though, In The Flesh offers a strange new take on the traditional zombie tale, turning it into a ruminative story of loss, guilt, and redemption — though personally, we’re hoping for a few cracked skulls, too.

The series centers around Kieren, a teenager with PDS (or Partially Deceased Syndrome), who has been brought back from death… or undeath, depending on how you score being a zombie. Rather than trying to imitate The Walking Dead‘s gory survival horror and zombie-chopping action, In the Flesh takes place after a zombie apocalypse, when a cure has been found that can bring the infected back to normalcy.

Medicated and rehabilitated, Kieren is being reintegrated into society. He returns to the town where it looks like he might have done some not so pleasant things, where the people know him and hate him. In the wake of the slaughter, the government has established the PDS Protection act, promoting tolerance for those haunted souls who are trying to get back to life as it was.

Of course, there are those who aren’t so eager — or able — to forgive and forget. In opposition is the Human Volunteer Force (HVF), a violent anti-zombie group unwilling to accept the rotters, setting the stage for a Bizarro World zombie tale, where humans are the monsters while recovering zombies just try to get back to their lives.

A zombie show as a psychological thriller that explores the societal complexities of life after an apocalypse? Sounds promising to me — what do you think?

Sadly, this is only set to be a three-part series. Like a lot of great BBC shows — I’m looking at you, Fawlty Towers — it may not satisfy the American appetite for overindulgence. Then again, this might be just what we’re after, a new spin on the genre. And those who are tired of zombies regardless, like those HVF jerks, will probably slam it anyway. Haters gonna hate.

And hey, if In the Flesh does well, perhaps the BBC will do the right thing and eventually deliver Downton Abbey: 28 Days Later.