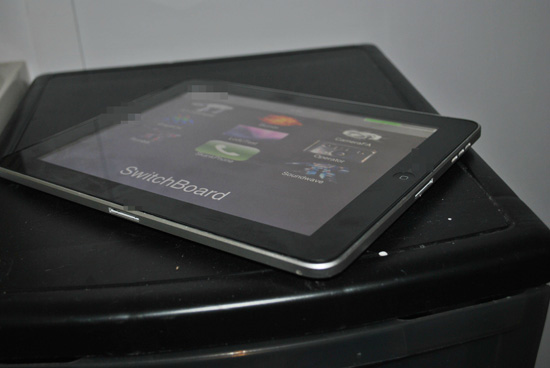 Apple is famously secretive about their prototype products, but every now and again one somehow manages to slip through the company’s grasp. The most recent stray was an early prototype of the original iPad, built somewhere between 2009 and 2010, that showed up on eBay. The prototype is interesting not only from a collector’s standpoint, but because it features a capability that never made release: Dual docking ports.

Though it has already been sold for a cool $10,200 (starting bid $4,800), the seller was kind enough to post numerous photos and provide a little information about the prototype. It boasts a 16 GB hard drive, a beta version of iOS 3.2, and runs the SwitchBoard software used by Apple to test their products. Unfortunately, the seller was unable to restore the device to complete functionality as the touchscreen was rendered mostly unusable.

The dual docking ports is not a complete surprise, as an early tablet patent by Apple featured two ports. Leaked photos of casings from before the iPad launch in 2010 also showed dual ports. According to an iLounge blogpost prior to the iPad launch, the hope was that dual docking ports would allow the user to watch media in landscape mode while the iPad was docked without unsightly cables sticking out one end.

We’re hearing that the tablet is going to have one on the vertical bottom edge and one on the horizontal bottom edge, enabling this device for the first time to be both mounted and charged either in portrait or landscape mode. iPhone and iPod touch users have long had to deal with the unusual sight of a cable or hard-mounted connector sticking out of the side of their devices when it’s being used as a widescreen video or game player, and accessory companies have struggled for the past three years to figure out ways to accommodate Cover Flow and the like in their speakers and docks. Two Dock Connectors fixes this, and depending on how Apple handles multiple accessory connections, could have some other nice benefits, as well.

Though I’m sure then-CEO Steve Jobs lost some sleep over the issue, it’s easy to see why the dual connectors never made it to production. Though both would be fully functional, having two connectors would probably confuse customers as to which they were supposed to use. This is the same logic that prompted Apple to always have a single mouse button. Also, I can’t imagine Jobs signing off on a device with any amount of redundancy; that would just be inelegant.

What’s interesting, though, is that Apple did decide to prototype the design. If something like this was once inside Cupertino, one wonders what other strange treasures are lurking in Apple’s R&D closet.