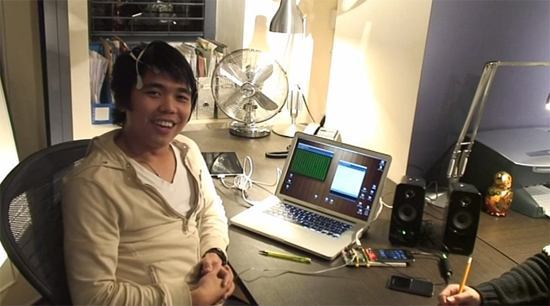 A few days ago, footage surfaced from a group calling itself Project Black Mirror. It showed three guys, one with electrodes on his head, and an iPhone 4S wired to an Arduino board. In the video, the group claimed that they had created a method by which to control Apple’s voice assistant Siri using their thoughts instead of their voice. The video shows a successful call being placed, much to the group’s satisfaction.

However, some people have begun to question if everything shown in the video is really as it seems.

According to the Project Black Mirror blog, the group began their project on Halloween. By November 8, the group made a post announcing a successful test of their prototype. On November 10, the group released a video intended to be posted to Kickstarter in order to raise money and continue their work. That the team was able to move from concept to functional prototype in just over a week is suspicious, but other critics have emerged with far more pointed criticism.

On his website, University of California physics undergraduate Greg Courville raises several issues that cast doubt on the entire Black Mirror project. Courville’s first point is that the SpeakJet chip shown in the group’s photos and video is oriented sideways. This configuration, according to Courville, “shorts a number of critical pins together, and therefore would make it impossible to use.” He also takes issue with the seemingly random flashing LEDs on the device’s breadbaord, and the suspicious Matrix-esque  green and black scrolling text on the computer screen used in the demo.

In the comments on the Black Mirror blog, artist and assistant Texas A&M professor Philip Galanter raises similar doubts related to the use to the use of the SpeakJet chip as Courville.

Courville’s second, and perhaps more damning objection, relates to how the Black Mirror team claim they were able to detect brain activity in the first place. According to their website, “ECG pads provide raw skin conductivity / electrical activity as analogue data (0-5v).” Courville finds it odd that they would use ECG pads, which is usually used to measure the electrical activity of the heart, as opposed to a more traditional method to gather EEG information. Moreover, Courville says that any information about the brain’s electrical activity gathered in this way would be too weak to work with the Arduino board.

The most glaring problem with that statement is the claim that EEG signals fall in an Arduino-friendly 0-5V positive voltage range. Suffice it to say they don’t.

EEG recording is really quite difficult from an electronics design standpoint. The signals in question have amplitudes on the order of *microvolts* (sometimes with substantial DC offsets due to galvanic potentials), the impedance of electrodes attached to the scalp tends to be rather unstable, and any interesting signals are buried under loads of interference from sources both inside and outside the body. EEG amplifiers typically have a very high input impedance, excellent common-mode rejection, and carefully designed filters to separate as much of the extraneous garbage from the signal as possible – and even then they’re not always reliable.

Another critical voice comes from the comments on the Project Black Mirror blog in a post attributed Trevor Coleman, the founder and COO of InteraXon, a company that specializes in brain-computer interface technology. Coleman had this to say:

I think this looks, to be blunt, impossible. And I have doubts about its authenticity.

For one, the way you’ve described EEG data collection doesn’t seem relate in any meaningful way to how brainwaves are actually collected. If you’ve simplified for the lay audience, perhaps you’d care to elabaorate to substantiate your claim. […]

If I’m mistaken, and you’ve made some extraordinary leap in the technology then you have my sincerest apologies.

Coleman’s comment is here, as well as a further comment here where he points out that if this is a fraud then it could hurt actual scientists working on BCI technologies. He goes on to say:

If someone really had invented something like this, they wouldn’t be posting it on youtube, they’d be meeting with their patent attorney and raising legit VC money to build it into a product. Honestly, if this was a real thing they could raise $10M overnight. They wouldn’t need to crowdsource.

I’ve been working with this technology since 2007. We have a team of engineers here who have been working with it since 2003. We know the state of the art. The claims that are presented here don’t jive with our understanding of what’s possible, and the technical implementation seems to be non-operational.

As of writing, the Project Black Mirror kickstarter project has yet to materialize. In truth, the prospect of the group creating an elaborate fraud to raise money on kickstarter seems highly unlikely as critics were sure to come out of the woodwork and complain. If this is a hoax, then it seems quite plausible that the group isn’t after money but hoping to demonstrate how easy it is to trick media outlets and online viewers. It would not surprise me in the slightest if, in a few more days, the Black Mirror team released a new video revealing their hoax and encouraging everyone to be more skeptical of what they see online.

For now, there haven’t been any further blog posts since yesterday and no fresh videos from Black Mirror. Until anything new comes out, you’ll just have to watch and judge for yourself.