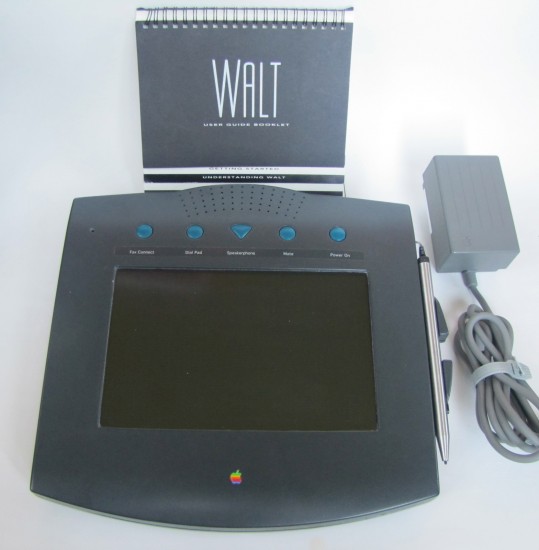 Right now, you can try to buy a piece of Apple history on eBay: A rare Apple WALT prototype. According to seller russel400, “WALT” stands for Wizzy Active Lifestyle Telephone, which is presumably an unfortunate play off of “what-you-see-is-what-you-get” methodology. Though it looks more like a credit card reader, the WALT is a phone that sports handwriting recognition, fax, address book, caller ID, speakerphone, message pad, personalized ring tones, and even runs a modified version of Apple’s System 6 OS. It’s like the iPhone went back in time and had a baby with a Newton.

While Apple is known for putting together advanced prototypes of products it doesn’t intend top bring to market, the WALT is a bit of an exception. The device was developed in conjunction with Bell South — meaning that someone else’s money was also on the line. More importantly, WALT was actually unveiled to the public at Macworld Boston in 1993. However, it was never brought to production.

Interestingly, the seller also has an early Apple set-top TV box prototype for sale that was developed with British Telecom. It had the ability to download and playback programs, but also interactive elements that never really took off. Think of it as an early Apple TV, but one that thought it was more of a computer than an entertainment device.

Though both of these products seem pretty laughable now, it’s pretty amazing that they both predicted the trends that have taken hold in the world of consumer electronics. They’re bulky, they’re old, and they’re overly optimistic, but they’re also a little prophetic. Whether or not that’s worth eight grand is up to you.