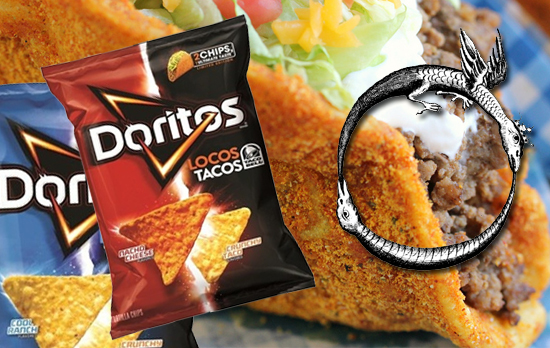 Do you know what Doritos Locos Tacos are? They’re the taco shells that Taco Bell made after forging an unholy alliance with Frito-Lay, which is basically just a big shell-shaped nacho-cheese-dust-infused Dorito chip. Evidently, the two food giants decided that wasn’t enough. They’ve decided to channel the Ouroboros of the ancient world: Today, Frito-Lay announced on the Doritos Facebook page the arrival of the Locos Tacos Doritos. Which are…Doritos Locos Tacos-flavored Doritos, which you can have in Nacho Cheese or Cool Ranch flavor.

Got that? The nacho chip became a taco shell, then became a nacho chip again based on the taco shell chip that was flavored like a nacho chip. It circles back on itself and eats its own tail. Riiight. So…why are they doing this? To mess with us? Because everything else has been invented? Because consumers will try anything? Beats me. Wasn’t it enough that the world now contains “Chicken & Waffle”-flavored Lay’s potato chips?

Look, I’m an avid gamer. I can go for a bag of Doritos every now and then, absolutely. I’m fairly sure orange cheese dust occupies some section of the Geek Food Pyramid.

But this is getting a little scary. And now Frito-Lay is holding a contest to see what people would be willing to do to win a “pallet” of Doritos.

Doritos Locos Tacos will become chips 4/8! Your chance to win a #DoritosPallet: tell us how bold you’d go to try them pub.vitrue.com/tOZX 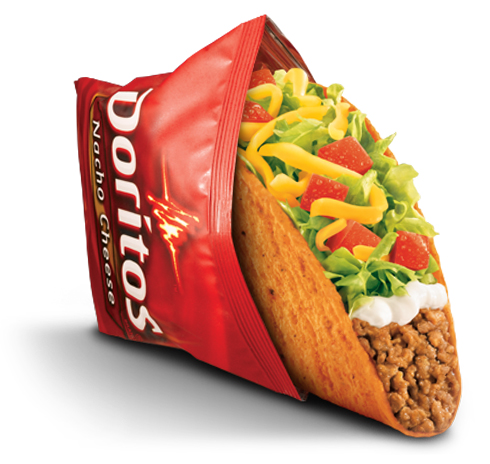 Pictured: Approximately 1/132 of your self-worth.

Had this announcement come on April 1st, this would have been a prouder day in America. Oh well. With this now happening, I guess it wouldn’t be too crazy to convince one of these companies to make onion wings or cookie bread.