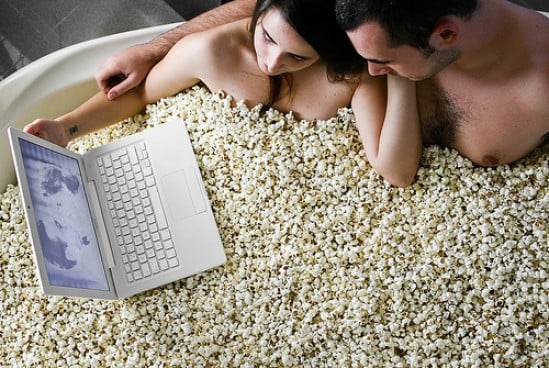 Listen, we all have our edible vices. Doughnuts taste really good, and the moist, fluffy texture feels great going down. We know. Trust us. The thing is, you really have to watch what you eat. Even something as seemingly innocuous as, say, two bags of popcorn per day, can be extremely dangerous. Just ask Wayne Watson, who developed “popcorn lung,” which sounds amusing, but spawned a lawsuit that resulted in Watson gaining 7.2 million bucks.

Watson ate two bags of popcorn each day for ten years. Assuming he didn’t skip a day, and give or take a leap year, that’s about 7,300 bags of popcorn over the designated period of time. Due to his habit, he contracted a rare disease — referred to as popcorn lung — thought to have been contracted from inhaling so much artificial butter, rather than consuming the actual popcorn. Watson stated he only has about 53% lung capacity due to the illness.

ABC News notes that popcorn lung, though rare, isn’t unheard of. Factory workers that regularly deal with diacetyl, which is a substance used to give popcorn an artificial buttery taste, sometimes contract the illness. Watson sued the company that produced the popcorn, Glister-Mary Lee, as well as a supermarket that sold it.

The companies being sued argued that Watson developed the illness from working with carpet-cleaning chemicals.

Now, Watson’s illness and the resulting $7.2 million for contracting it are tragic, and also a little ridiculous, because the real story here is this: Stop eating like crap all the time!

Remember the girl that only ate chicken nuggets for 15 years, then was finally rushed to the hospital? Wasn’t much of a surprise, was it? Remember Super Size Me? Sure, it was a little silly that he started throwing up in the parking lot only after a couple days of eating McDonald’s, and yeah, if he worked out feverishly, that would’ve mitigated some of the bad food coming in, but it still wasn’t a big surprise he became overweight and unhealthy. The point is that if you eat some kind of ridiculous diet, good things probably won’t happen. So, either eat a more balanced diet, or don’t be too surprised when you somehow get sick from eating 7,300 bags of popcorn.

Even the professor who partook in the Twinkie diet — and lost weight from it — supplemented the weird diet with a healthy shake and some vegetables, and he didn’t do it for too long. Junk food is great, sure, but are way too many Doritos really worth some horrible illness? Maybe so if you can net $7.2 million for your awful diet, if you’re that sort of person, but 53% lung capacity doesn’t really seem worth any amount of money, right?