Doctor Who Speculatron: Will Vastra Be Back Next Season? (And Will Jenny?) 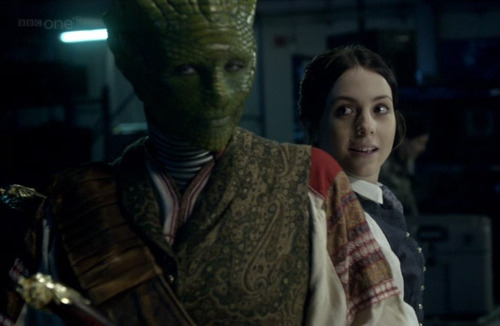 A recent story appearing in the UK’s Daily Star — which looks like a highly reliable source of information — sent Whovians into the proverbial “tizzy” recently when it was gleaned that Doctor Who guest star Neve McIntosh might return as Madame Vastra in the upcoming season. Why, according to the Daily Star? Because lesbians! (Seriously — read the article. It is all about lesbians.) But McIntosh is downplaying the rumor, while still subtly hinting that she might like to come back to see what’s transpired since we last saw the lizard queen and her human lover Jenny (Caitlin Stewart). And how it might involve the Doctor’s new companion. Hint: Lesbians!

McIntosh posted on Twitter that she “has no idea” what the Star is talking about, but in a response to another fan about the rumor, she said she was “still thinking up plot lines to pitch to [Mr.] Moffat.” As in Stephen Moffat, the Doctor Who showrunner. But as much as many of us would love to see McIntosh return as the Silurian warrior, the actress points out that “we’re talking about the [Daily Star]” here.

For a refresher, we last saw Madame Vastra in the episode “A Good Man Goes to War.” In that episode, here is what we learned about Vastra: she eats people, she is in an intimate, interspecial relationship with Londoner Jenny, and she knows the Doctor very, very well. Since she owed him a favor, Vastra helped track down the Ponds’ baby, Melody. Despite her healthy appetite for humans — and when I say “appetite,” I mean she literally wants to eat them and not just know them carnally — her loyalty to the Doctor is undisputed and she orders her soldiers to protect Melody at all costs upon finding her. Vastra and Jenny were so popular as characters that the idea for a spin-off was thrown around, but never pursued.

Now, the Daily Star is saying that the crew of Doctor Who want to “shake things up” with a lesbian plot line between Vastra and the Doctor’s new companion, played by Jenna-Louise Coleman. As evidence, the Star offered up the fact that Coleman “starred as a lesbian in Emmerdale.” So she has experience! And their source? “A source.” It’s definitely for real, then. Good job, Daily Star!

For his part, Moffat said he enjoyed Vastra and Jenny a lot and would be open to another story involving them. That was almost a year ago, when he was working on last season. Is it possible that we will see characters who are fan favorites return? Absolutely! Is it happening, though? Doesn’t look like it just yet.