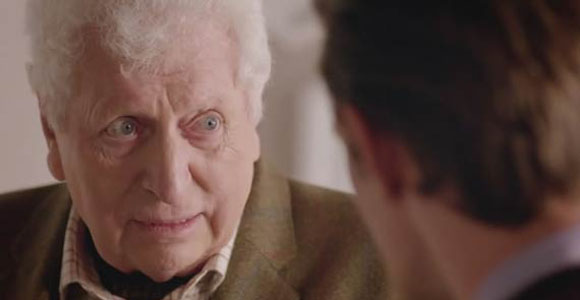 I jest, I jest. Although, these types of things should be taken seriously.

Tom Baker, a fan-favorite Doctor on the long-running BBC sci-fi series, was recently speaking about his past experiences on the show while doing press for The Horror Channel’s upcoming airing of classic Doctor Who episodes. And the press presented him with a scenario he then ran with. According to The List:

While being quizzed about one of his most famous scenes as the Time Lord in ‘Genesis of the Daleks’ where he has the option to cross two wires and destroy the alien race, he said: “I like that one very much, because of the big speech part and the line ‘do I have the right?’ If somebody gave me two wires now and said, ‘If you touch them together you could blow up the whole BBC,’ I think I might be tempted, yeah. But I’d only be tempted for a second – and then I’d do it!”

Baker, always the joker, went on to have a little more fun at the expense of the BBC. “The thing with the BBC is you’ve really got to be able to suspend your disbelief, I mean anything can happen at the BBC,” he said, “The monsters on ‘Doctor Who’ were never so amazing as the monsters on the sixth floor as I remember them. There were some very improbable looking people there. Who would make signs and nudge you and things.”

The actor, who made a surprise appearance for the big 50th anniversary episode, also talked about the time he turned down appearing in the 20th anniversary. “I had left ‘Doctor Who’ because I think I’d run my course. I didn’t want to play 20 per cent of the part. I didn’t fancy being a feed for other Doctors – in fact, it filled me with horror,” he said. “Now, of course, if someone asked me to do a scene with some other Doctors, I think, if they let me tamper with the script, it would probably be quite droll. I would think about that, yes.”