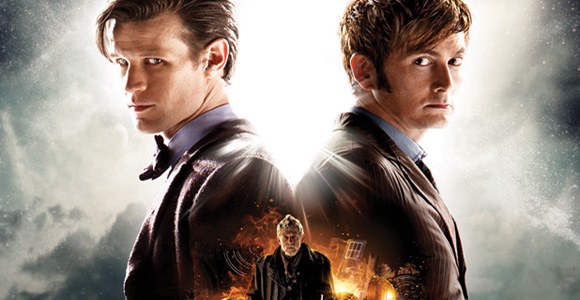 The Doctor Who 50th Anniversary Special was a sweet love letter to Who fans complete with some delightful cameos from what can only be described as old friends.  It was, in this fan’s opinion, a far more delightful and strong episode than Matt Smith‘s final episode, so if you haven’t checked it out yet, you should. It turns out, one of the most exciting cameos happened under cover of darkness and without the guest star meeting Smith before filming. Spoilers abound after the jump!

Fourth Doctor Tom Baker has posted about his experience filming his cameo as the Curator in the anniversary special on his website in a very charming way. Apparently, he developed a habit of only reading his parts of any script during his time as the Doctor because, “My job was to play the hero, the Doctor, as he reacted to events that affected him,” so he didn’t know what happened in the rest of the special until it aired. The Doctor Who gang was so concerned with fans or press finding out about his cameo that they flew him into Cardiff in the dark of night, tossed him on set, and then he left! Baker says:

After a while the time passed as I knew it would, but it dragged its feet. Finally people began to arrive and I was called to costume and make-up and finally to the set. In the old days I knew everybody, or nearly everybody, the technicians and make-up people and all the other actors: I was at home in those long gone times. My gloom was lifted by the arrival of Matt Smith who welcomed me so enthusiastically that I began to think life was worthwhile.

And so we started to shoot the scene so that I could get away “in no time at all.” Matt and I did not discuss the scene or talk about what it might mean; God forbid! No, we started just after eight o’ clock and about four hours later I was released. I tried to flee but the enthusiasm of the crew meant I was in big demand for pictures and autographs. People were nice but I longed to be away. At last we left and my driver got me back to Sussex by late afternoon

Six months passed before I could judge how the scene would be received.  Because I had to keep the secret of my part in the Special, I almost forgot I was in it!  And so we came to November 23rd and the 50th Anniversary Celebration at the ExCel Centre, the launch of the Doctor Who Special and the interviews.  There were thousands and more thousands of fans there: more than I had ever seen anywhere.

Baker seems to be adorably surprised by the fan adoration and excitement both for him as the Doctor and his cameo in the special.  As a consistent fan favorite, though, it’s really no surprise that new and old Who fans alike were excited to see him. While a lot of the attention for the special got focused on Tennant’s role (which: swoon) and Eccleston’s lack of a role, Baker (and all the other Doctors to varying degrees) deserves a lot of credit for creating fans out of the current generation of Doctor Who cast and crew.