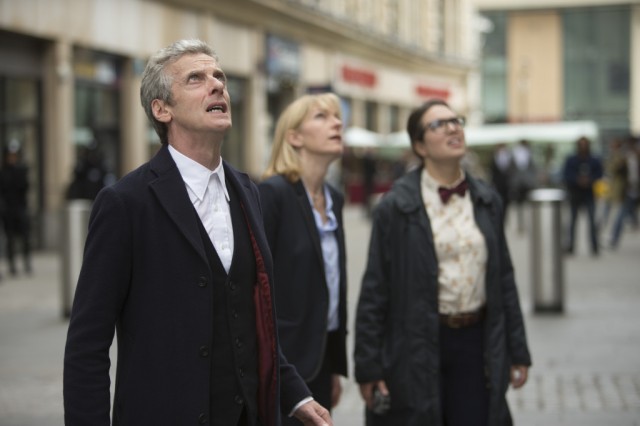 For real this time, my thoughts on the Season 8 finale of Doctor Who.

The strange line we heard in the preview for the finale, Clara claiming Clara never existed, turned out to be her way of trying to stay alive in the face of Cybermen. It’s a callback to “Flatline” where she tries to pretend she’s the Doctor again. It’s not really working but thankfully Cyber-Danny, now “alive” thanks to The Master/Missy’s plan, has his humanity still with him (how?) and saves her.

The Doctor is about to flip his shit on Missy when UNIT arrives, complete with Osgood and Kate Stewart (yah!). Osgood is sporting a bow tie this time around and utters Matt Smith’s classic line. Kate mentions the Doctor is on their payroll and Osgood counts the flying Cybermen coming out of St. Paul’s Cathedral (she says she can do that because she’s OCD). But while UNIT captures Missy and uses a tranquelizer on her, they do the same to the Doctor. He has just enough time to tell Osgood they should “guard the graveyards.”

See, the Nethersphere is revealed for what it really was, a data storage facility for the dead’s consciousness meant to return to their bodies at the appropriate time. Cyber technology gets to the bodies by way of massive clouds and the special rain they produce. Long story short – pretty much every single grave or freshly dead corpse on Earth is now a Cyberman. That’s a lot.

The Doctor is woken up just before everyone gets on a special UNIT plane and I wonder why they didn’t wake him up when they were already in the air if they really thought he’d say no. Anyway, there’s a portrait of Classic Who characters, and Kate’s dad, Brigadier Sir Alistair Gordon Lethbridge-Stewart hanging up and we get introduced to another military character who I predicted wouldn’t have much to do. I was correct in that assumption. Kate informs the Doctor he’s been chosen as the President of Earth which means he’s the commander in chief of all of the world’s armies. Oh, how ironic.

Missy is still tied up on board the plane and tells the Doctor she’s alive because he saved Gallifrey. And oh, by the way, she knows where it is. The Doctor listens to Osgood’s observation then casually drops his usual Companion line “All of time and space? Something for your bucket list?” Of course this gives us hope the fantastic Osgood could be the next Companion and of course that seals her fate. Missy had an escape plan ready and even though there were two guards BEHIND HER where she was getting out of her handcuffs, she still manages to evaporate both of them and take Osgood hostage. Here Missy is in perfect Master form, tormenting the innocent woman while making jokes during the perilous situation. No change of heart, no remorse, she kills Osgood.

Meanwhile, Danny has brought Clara to a cemetery and you have to wonder why, considering he supposedly still has his emotions and that’s exactly the last place she should be. It could be that he doesn’t have total control since he’s part of their hive mind but it seemed pretty ridiculous. The Cyberman are slowly but surely hatching around the globe but not bothering to convert anyone yet.

Cyber-Danny reveals himself to Clara by taking off his Cyber face and… it’s absolutely horrific. He’s got the face of a dead man plus the extra Cyber attachments and seriously, there’s been some scary things on Doctor Who before but this might take the cake for just how screwed up it is too. Danny implores Clara to turn his emotions off, which again, WHY? If you do that, theoretically you’re just like any other Cyberman and would then KILL Clara! Yes, he doesn’t want to be in pain anymore, I get that but then, just have her kill you instead. It’s still messed up but at least it would make sense. 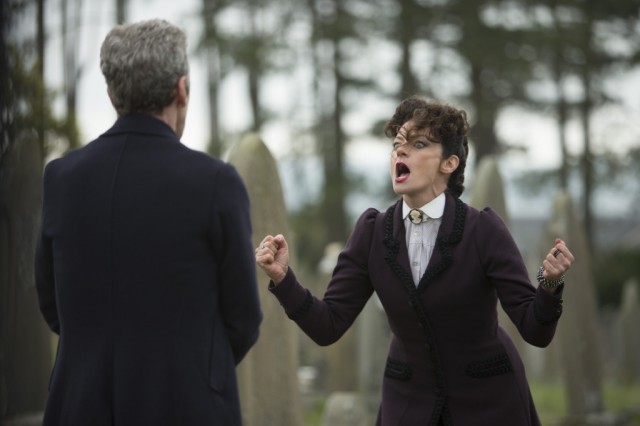 We get a flashback to remind us just how clever Steven Moffat is. I mean, to remind the audience of the phone call which first linked Clara and the Doctor together, which was actually Missy. She claimed she needed to find a “control freak” for the man who can’t be controlled. Apparently this was to insinuate Clara has the Doctor wrapped around her little finger? Which is not really the impression I ever got.

Back on the UNIT plane, Cybermen are ripping it apart aaaaaaaand Kate gets sucked out into the void.

Oh yeah, and the other military guy dies too (he literally did nothing the entire episode), and then Missy also kills Seb and I couldn’t help but say, “Seb’s dead, baby. Seb’s dead.” The Doctor gets out of the plane just before it explodes, free falls straight into the TARDIS, and then lands at the graveyard where Clara had called for help. Clara explains the situation but the Doctor tells Danny his pain is a gift and the two start their arguing all over again. When Clara insists on doing the deed herself, the Doctor hands over his sonic to her and Danny says, “got to keep those hands clean.” This is getting increasingly traumatic.

And then Missy lands in the graveyard by way of umbrella. Just like Mary Poppins. And I can’t.

Missy claims it’s the Doctor’s birthday, sings to him à la Marilyn Monroe, then slaps the bracelet meant to control the Cyber-army on his wrist. Now they are his. “Armies are for people who think they’re right,” she says. Now he can use this power to settle every conflict in the universe, just like he’s always wanted to. In giving up, Missy also hopes to get her friend back, meanwhile Clara is literally no help – she’s just hugging Cyber-Danny long and uncomfortably.

But wait! The Doctor thinks back to the rest of this season and thanks Missy with a kiss. This whole exchange gave him just what he needed apparently. At some point Clara did turn off Danny’s emotions (if I’m remembering correctly) but the Doctor says love is a promise, “the promise of a soldier,” and puts the bracelet on Danny who then overcomes the programming to save the day. But not before he and Clara exchange “I love yous” one more time and bring everyone to tears over how horrible their relationship was the entire season.

In her anger, Clara decides she’s going to murder Missy but the Doctor tells her he’ll do it so she doesn’t have to. “You win,” he tells Missy/The Master just before a Cyberman zaps her instead. When they go to find out why this one was left, they find Kate, not dead, and realize this Cyberman is the Brigadier. Which may be a great moment for some Classic Who fans (though personally, it rubs me the wrong way) but it can’t mean much to Modern Who fans.

Two weeks later Clara hears Danny’s voice. The Cyberman control bracelet, which allows people to move between worlds (?) can apparently also let just one (of course) person come back from the dead. It’s all a bit hand-wavey but we know how this is going to end. Danny sends the child he killed back through and tells Clara to find his parents (though it’s many years later). The Doctor attempts the coordinates Missy told him Gallifrey was existing in but nothing is there. One more lie to add to the pile. The Doctor goes into a bit of a Hulk rage.

Finally the Doctor meets with Clara who has something very important to tell him. Before she can, he interrupts assuming he knows what it is – that Danny used the bracelet to come back and Clara is finally going to stop travelling with him so they can live happily ever after. She lets him believe that lie while he tells her another about finding Gallifrey and going back there to live with the Time Lords again. They decide to hug, even though the Doctor says he doesn’t like them because they “hide your face” and they share one more fuzzy before going their separate ways for what feels like the last time. “Thank you for making me feel special.”

And a short, post-credit teaser for Nick Frost Santa, which I can barely take any joy in at all because of how depressing the rest of this episode was.

I think after this episode everyone really needs to watch that video message Peter Capaldi sent to the young autistic boy to help him deal with grief because… damn. This may be Doctor Who’s darkest hour. In more ways than one. While the “feeling things after death” thing turned out to be part of the larger plan, it’s sticking with me and the second half of the episode didn’t lighten the load at all. There were a few episodes this season I greatly enjoyed but the overall theme dragged me down to point where I’m considering not watching the show anymore because it’s not bringing me any joy. Clara was going to murder someone but didn’t have to because the Doctor was going to in her place, neither a fantastic scenario. And the Doctor feels he won because he didn’t give into the temptation to basically rule the galaxy but it doesn’t feel like a win when everything else is so awful.

There are still a few lingering issues for me. Apparently a woman with a Scottish accent tipped UNIT off in the first place. Who was that? Is Missy dead? I’m going to guess not. Also, killing Osgood was a huge mistake. I absolutely understand it story wise but also can’t help but feel the fan-replacement aspect of the character either. What a blow. I will say my favorite part of the episode were the scenes between Danny and Clara, even though they were terribly hard to watch. On one hand they were incredibly powerful but it just goes to show just how weak their story arc was the entire season. And not for nothing but why did we get what amounts to a perfect goodbye between the Doctor and Companion who did nothing but lie to each other only to bring Clara back for the Christmas Special? I don’t see this ending well or continuing on as anything positive. Better to leave well enough alone, no?

Perhaps you felt differently about the episode but after what was a very compelling first half for me, the second part fell apart completely and left me longing for fun adventures through time and space again.