Flatline?? My heart was beating all over the place! 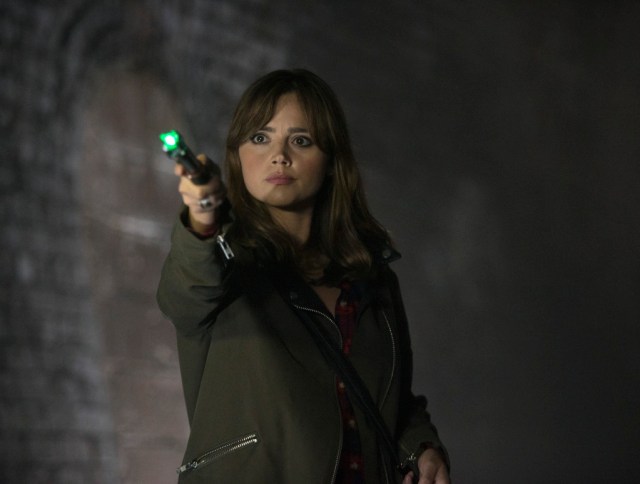 So this is what it would be like to have a woman play The Doctor.

This Jamie Mathieson guy… I’m growing attached to him. Consider keeping him around for a while, BBC. After last week’s episode, I was wondering if we’d dive back into the overarching story or get another (mostly) standalone adventure. Turns out a bit of both, but it worked!

We kick things off Wonka style with the TARDIS landing in the wrong place (for Clara’s timed return to Danny so he doesn’t realize she’s still traveling with The Doctor) and with a tiny door. The inside of the TARDIS doesn’t seem affected, but the outside has shrunk about 50%. And it’s adorable. The Doctor decides to stay behind to investigate while sending Clara off to see what’s happening outside in Bristol. And I just have to note, I think Clara is wearing pants for the first time in a while.

While The Doctor goes on about leeching external dimensions or some such as the TARDIS shrinks even more, Clara meets Rigsy, her companion for this episode. Yes, Clara introduces herself as “the Doctor” after borrowing his sonic and psychic paper. She then goes on to literally play his role in the episode. And it’s super cool.

As they investigate disappearances in the area, we get a few references to locked room mysteries. I’m instantly sold on trying to figure this one out. They investigate a flat where a man disappeared, and where there’s a desert-looking image on the wall. They don’t find it to be all that strange, which is strange in itself. But there’s no time for that—the Doctor is being hysterical while stuck in the TARDIS. I must say, the visuals of this episode were absolutely fantastic, both with the shrinking TARDIS and the villain. 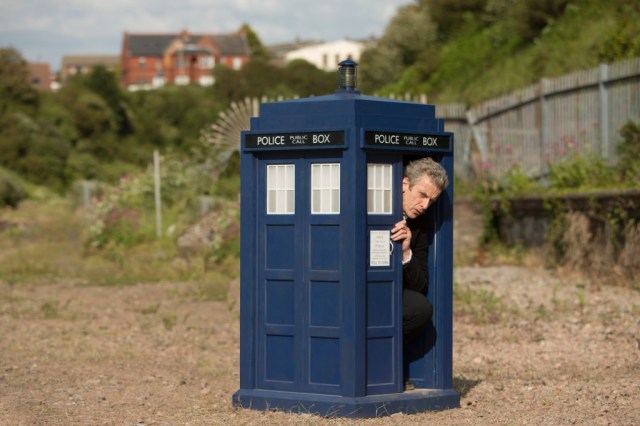 At another flat, Clara passes herself off as MI-5 but isn’t quick enough to save a police officer at the scene who’s pulled into the carpet by these as-yet-unnamed villains. She and Rigsy are quickly targeted as well, and they’re in the midst of figuring a way out of their predicament when Danny calls… and hears what basically sounds like sex noises from Clara and a man on the other end of the line. Clara lies to get out of their date and oh boy, this is going to be trouble, isn’t it? The Doctor, on a headset with Clara, hears her excuses and praises her on her excellent lies, which he calls a “vital survival skill” and “a terrible habit.”

Moving on, the Doctor surmises the creatures come from a universe with only two dimensions, and Clara confronts some of Rigsy’s fellow community workers who aren’t so quick to catch up with weird alien things. They get the gist after the Doctor realizes the aliens are wearing the missing people like camouflage and another one is taken before their eyes. On the run, the Doctor informs Clara she must quickly put herself in a position of leadership in the group before someone else does (much like the Doctor in every situation ever). He coaches her a bit on how to deal with it all, but Clara’s been with him long enough to know—lie to them, give them hope.

The Doctor attempts to give the as-yet-unnamed villains the benefit of the doubt by trying to communicate with them, but everyone realizes pretty quickly they really aren’t the friendly sort. The group attempts escape down an old train tunnel, but their exit is blocked by the creatures making the door handle 2D. The Doctor gives Clara a device he thinks will reverse that effect—something he dubs the 2DIS (LOL)—but it fails. The creatures have reached another stage by this point, 3D, but they look like an absolute horror show. In their rush to escape, the TARDIS falls out of Clara’s hands and lands on some train tracks. And just as I’m wondering why the Doctor doesn’t just stick his hand out the door and scoot himself away, Clara suggests he pull an Addams Family. Brilliant. Also, now the TARDIS looks like a bizarre hermit crab and I’m surprise how much I’m giggling amongst the horror.

Sidebar: in a bit of bad timing, a Doctor Who Insider commercial aired in which the actors call the villain “The Boneless,” even though they  hadn’t yet been named in the episode. 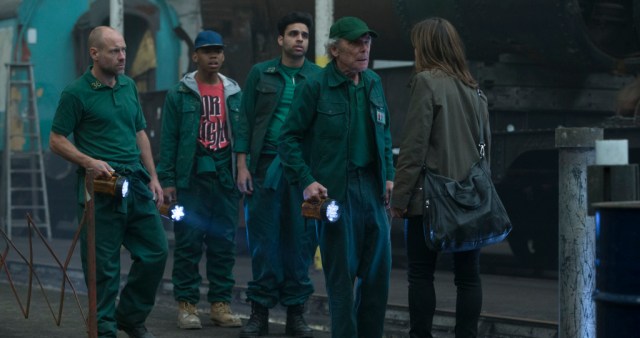 As the situation inside the TARDIS gets worse, going so far as to turn into “siege mode,” apparently the Doctor loses all will to keep his hair fluffy. Clara manages to stop an oncoming train with just a conductor on board, and Rigsy takes on the usual brave companion mode of sacrificing himself in order to let the others get away. Clara informs him this job could be done by her headband, and they both jump of the moving train unscathed.

Here’s where Clara gets the genius gene and has Rigsy spray paint an old poster to look like a door. Since the door was never 3D, the energy from the creatures goes straight through it to the TARDIS cube, energizing it enough for it to return to normal and allowing the Doctor to exit and claim them to be monsters. And also naming them “The Boneless.” And his hair is back to being fluffy, so he can destroy them now.

When all is said and done, the Doctor tries to accept his usual praise only to see it given to Clara, the real Doctor of the episode. When Clara herself is looking for praise from him, asking if she made a “good” Doctor, he tells her: “You were an exceptional Doctor, goodness had nothing to do with it.” Ouch. Right in the feels.

We get a Missy outtro this week where she’s watching that scene unfold and remarks, “My Clara, my Clara. I have chosen well.” WHAT DOES IT ALL MEEEEEEEAN!?!?

Gotta say, I really, really enjoyed this episode. It was a really entertaining—and frightening—mystery with a finale that didn’t feel rushed for a change. This season, and especially this episode, Clara has been getting the character attention she deserved when Jenna Coleman first took on the role, and it’s paying off in a great way. Also, bonus points, there weren’t any body insults thrown at her by the Doctor this week! I wasn’t kidding when I said this episode gave us a look at what a woman playing the Doctor could potentially look like. And guess what? It wasn’t weird in the least. It was actually pretty darn cool.