Doctor Who Recap: “In The Forest Of The Night” 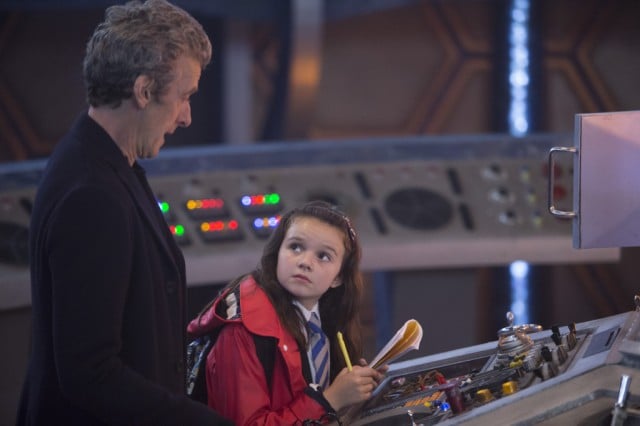 I want to eat this child she is so goddamn adorable.

I imagine if I were a little kid I would have loved the hell out of this episode. As a 30-something, I enjoyed it quite a bit.

The TARDIS is stranded for some unrevealed reason, in the middle of London, only London is now covered with trees. Actually the whole Earth is covered with fairly thick vegetation suddenly which Clara and Danny find out after leaving a sleepover at the museum with some of the Coal Hill students. Oops, they lost one! A child, that is. Her name is Maebh (totally thought it was Mave for pretty much the whole episode) and she’s freaking precious. We learn her sister had gone missing a year ago which has left her with some emotional trauma and on medication. So yeah, if they were going to lose one of the kids they picked the best one. It’s ok though because Maebh has found her way to the TARDIS and the Doctor’s reaction to her existence is pretty much what you’d expect.

Clara, Danny, and the remaining kids head off in search of the Doctor after they realize, thanks to a phone call, he’s there too. Clara’s all, “adventure!” Danny’s all, “we must keep the kids safe!” Which, when you think about it, really means Clara probably should find another profession but she just gets all doe-eyed about Danny making children a priority. Anyway, we get word the government is going to try and clear paths for emergency services by burning some of the trees (only they won’t burn) and we also start realizing the kids are acting smarter and better than they usually do. And now that I’m typing that out I can’t recall there being an actual reason for that. Was it just that they weren’t in a classroom and were getting to use different skills in the real world?

Danny and Clara’s “team” finds the TARDIS but the Doctor and Maebh have gone out exploring. So… it’s playtime in the TARDIS!! Can we just get a webseries where the Doctor only travels with little kids and nothing horrible ever happens? Some explanatory time gives us the Doctor saying our planet grows in a series of catastrophes (the ice age is referenced) and Maebh hears voices.  Danny realizes once again Clara has been lying straight to his face about the Doctor thanks to some schoolbooks lying around in the TARDIS and seriously, at this point I’d just break up with her.

The Doctor and Maebh run into some trouble when escaped zoo animals start hunting them. I could have swore the creatures hiding in the bushes waiting to eat them were panthers but then I realized it was actually more like a case of this…

and I might have crapped myself for a minute. Moving on.

Turns out they were just regular wolves and they weren’t after humans anyway! They were running away from a tiger! But Danny saves the day by shining a flashlight in the big cat’s eyes and they all escape. Now that everyone is together again, we can try and figure out this mystery. The Doctor inquires a bit more into Maebh’s condition and insists there’s more to it. There is, of course and the Doctor uses his sonic to change the density of gravity (I think that’s what it was) around the girl, who also happened to mention “miss” was the one who told her to find the Doctor in the first place. So she probably didn’t mean Clara, but Missy. Hmm.

I can’t remember exactly where in the episode I realized the whole tree event was probably a good thing, not a bad one, but the audience is strung along a bit more as the Doctor speaks to the tree sprites (which, if they had a name, I forgot to write it down) who possess poor Maebh in order to talk. Long story short, a solar flare is going to kill everyone on Earth and suddenly we have another moment in time the Doctor has no recollection of having happened. Only they don’t really take the time to address that and instead run to the TARDIS in one last ditch effort to at least save the kids. Only but this point Maebh’s mom has found her and seeing a mom has made the other kids really sad to not be with their’s. So the Doctor is like, “Well ok, I’ll at least save you and Danny… just you, Clara?” Eh, neither, replies Clara because she doesn’t want to be the last of her kind. She actually lied about the TARDIS being a lifeboat which could save them all because she only wanted to save him and he wouldn’t have gone back otherwise. You see because the Doctor actually DOES want to save humans if he can and also “THIS IS MY WORLD TOO!” 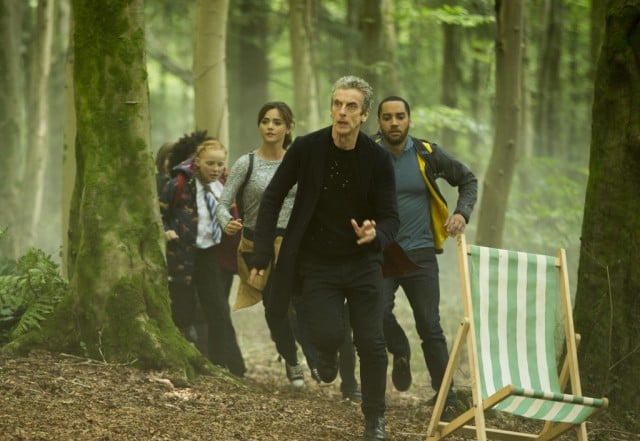 Woah. Woah, woah, woah. Do the Doctor Who writers get to speak to one another or are they locked in cells until their work is completely done? Because I’m pretty sure the last time the Earth was in this situation the Doctor said “The Earth is not my home. The moon is not my moon. It’s your moon, WOMANKIND.”

Anyway, at the last moment the Doctor both reveals to the children the Earth is about to be destroyed (which they weren’t privy to previously) and that he believes the trees are actually there to save them all, preventing the solar flare from burning us all up thanks to all that extra oxygen. The Doctor also dubs himself “Doctor Idiot” here which I’m sure will come of much use down the road for all of us.

The government, after realizing they couldn’t burn the trees, is going to take their leaves off instead by other means. The group decides to let Maebh send a message to everyone on Earth via their phones that they are absolutely, under no circumstances supposed to harm the trees. While we wait to see if anyone listens to this little girl they don’t know on the other end of the line, Danny tells Clara he didn’t try too hard to survive while he was at war. Jesus, that’s dark. And no, he doesn’t want to watch the magnificent solar flare, he wants to watch what’s already in front of him. Oh, and he just wants Clara to tell him the truth. But not like, right now. Some other time when it will be dramatically relevant.

Clara watches the flare from the TARDIS, while Missy is watching on her tablet seemingly surprised at the turn of events. The Earth is saved and Clara wonders why people would have forgotten this dramatic event in history. The Doctor says people forget. You know, if we remembered stuff like that we would no longer have wars. Or babies.

Oh and Maebh’s sister is found inside a bush when they get back home. I think I might have missed something.

This was a fun episode, to be sure. Not sure how I feel about the whole “forget about mental health issues because that person talking to themselves may actually be talking to aliens” lesson here but I’m trying not to read too much into it. There were some inconsistencies I couldn’t ignore here though, like the Doctor showing he cares about Earth again and Danny being WAY too nice to a girlfriend lying to him constantly, but I’m hoping the finale episodes will reveal something that will have it all make sense. What did you think?