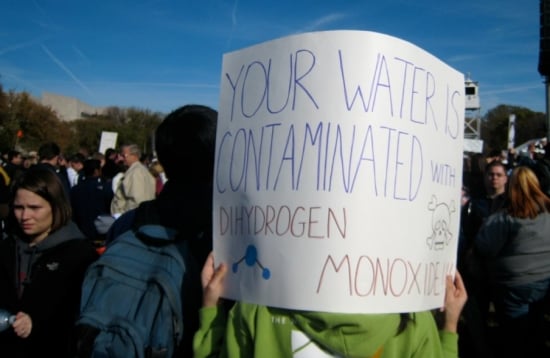 We probably don’t have to tell Geekosystem readers this, but water is made up of two hydrogen atoms and one oxygen atom. It can be written as H2O, or as dihydrogen monoxide which means literally “Two hydrogen one oxygen.” When two Florida radio DJs announced that dihydrogen monoxide was coming out of their faucets, the Fort Myers area went bananas. The DJs have been suspended indefinitely and could face felony charges.

WWGR “The Gator” morning show hosts Val St. John and Scott Fish have been off the air since Monday morning over the April Fools’ Day incident, and a poll on the station’s page about when they should return has 78% of people voting “never.” That’s a harsh response to a joke that high school chemistry teachers have been making for decades.

The felony charges they potentially face are shaky at best, but stem from the reaction of the public, who started calling their local utility officials about the “contamination.” The county eventually had to release an official statement telling residents the water was fine. Lee County information officer Diane Holm told a local TV station, “My understanding is it is a felony to call in a false water quality issue. They will have to deal with the circumstances.”

But Fish and St. John didn’t call in a false report. What they said was true, and the station spent the rest of the morning constantly reminding listeners that it was a joke and that their water was not contaminated. If St. John and Fish are guilty of anything, it’s of being the kind of radio hosts that try to be clever on April Fools’ Day. Now that should be a felony.

(via The Atlantic Wire, image via socialgrace)