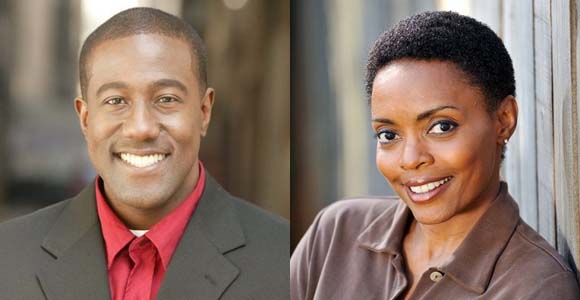 Two more lucky (or unlucky depending on how you look at it) actors are about to head into the arena. Lionsgate has announced the District 11 tributes for The Hunger Games: Catching Fire – E. Roger Mitchell and Maria Howell. Hit the jump for details!

Mitchell and Howell will play Chaff and Seeder, respectively. Chaff was the winner of the 45th Hunger Games and hails from the agriculture district – the same as Rue. He’s described as having dark skin, in his forties, six feet tall, and has only one hand thanks to his first time in the arena. He’s also good friends with Haymitch.

Mitchell has done a lot of stage work but has also appeared in Flight, Battle: Los Angeles, Diary of a Mad Black Woman, One Tree Hill, and House of Payne.

Howell has the opportunity to take on Seeder who’s described in the books as having “olive skin and straight black hair streaked with silver.” She’s also supposed to be around 60 years old but known for living a very healthy lifestyle. The actress has previously played in Army Wives, The Vampire Diaries, House of Payne, and The Blind Side.

It will be interesting to see how much screen time all these actors get. In The Hunger Games, lots of characters who were fleshed out in the book were skimmed over on film but the ancillary characters in Catching Fire all play much more important roles in the plot. If not directly, certainly when it comes to Katniss’ mental state going into the Quarter Quell.

(via Digital Spy, The Hollywood Reporter)