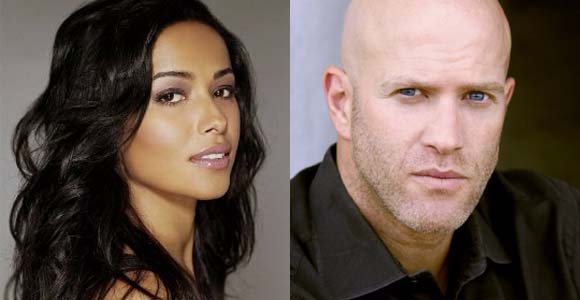 There are enough new characters in The Hunger Games: Catching Fire I feel like we have a casting announcement every other day. Except for those days when we have two. Lionsgate has cast Meta Golding as District 2’s Enobaria and Bruno Gunn as Brutus.

[Editor’s note: Character details to follow, read at your own risk.]

Golding is best known for her roles on CSI and Criminal Minds. She’ll take on Enobaria, the voluntary District 2 tribute who ripped out another contestant’s throat to win her Hunger Games at the age of 17. After her big win, she had her teeth filed into fangs and tipped with gold.

The Hunger Games Facebook page gave some information on the actress.

The daughter of an American United Nations food relief worker and a Haitian beauty queen, META GOLDING was raised in the United States, India, Haiti, France and Italy. After an injury sidelined her career as an Italian National Figure Skater, she brought her love of performance from the ice to the stage. Her ability to speak 3 languages and various other dialects made this transition come naturally. Meta started acting in Italian theatre before heading back to the United States to attend Cornell University, where she obtained degrees in Theatre Arts and International Relations.

And just today, Gunn was confirmed to be playing Enobaria’s District 2 partner, Brutus. It’s not known how Brutus won his Hunger Games but his name says a lot about him and he’s very excited to get back in the arena. Gunn has several small TV and film credits to his name including Oz, Bad Teacher, and The Office.

Am I the only one who keeps forgetting most of the tributes aren’t teenagers this time around? Also, I know there are still quite a few roles to be cast/announced but does anyone else think they are purposefully leaving Finnick until the very end just to screw with us?