Did NYCC Prove The Need For Diversity In Comics? | The Mary Sue

Did NYCC Prove The Need For Diversity In Comics? 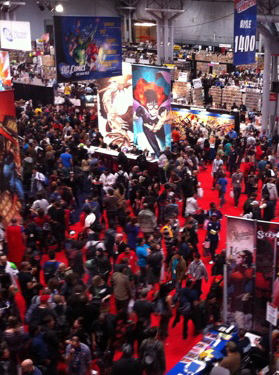 The New 52 has been a success at getting outliers interested in comics again. But looking around the Javits, at the ocean of non-white faces, and of female faces, it became VERY clear to me that all the angry blog posts begging for more diversity in the comics isn’t just a few loudmouths—even though they are treated as such by the big companies. It’s the reality of the world. Reaching this audience through inclusion might just be the most important goal for the mainstream comics industry’s continued survival. – Heidi MacDonald writing her New York Comic Con wrap-up for The Beat.

It’s just a little maddening having been one of those “loudmouths” myself to see this particular aspect of conventions, and in turn comics, so obviously noticed by what seems like everyone but those like DC Comics who really need to experience it. Not having attended any of the DC panels at NYCC (a first for me), I can’t say whether or not the demographics were represented the same way there but the point is – if they are at a convention they are potential readers/new readers. Wouldn’t it make sense to provide something they can see themselves in?