Devil May Cry Movie in Development | The Mary Sue

Devil May Cry in Development by Company Behind Resident Evil Movies 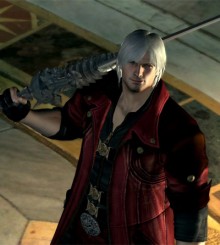 The probably-not-aptly-named Screen Gems, a subsidiary of Sony Pictures Entertainment’s Columbia TriStar Motion Picture Group, has bought the movie rights to the Devil May Cry franchise, with Kyle Ward–a writer on the upcoming movie adaptation of Kane & Lynch–hired to write the script. Currently, the script is supposedly about Dante avenging his mother’s murder by killing demons, and one can only assume that said demons murdered his mother, or else the action he is taking to avenge his mother wouldn’t be very appropriate.

The company who now owns the rights is the same company behind the Resident Evil movie series, so now we can all be terrified of how Dante is probably going to be ruined both in the upcoming movie and upcoming game.

Here’s hoping that they somehow realize they should cast Josh Holloway. He can be a Dante, right? (Yes, is the answer.)