Chuck Dixon has not only written a lot of Batman comics, he was heavily involved in my favorite era of the character, in which the state of Batman’s relationships with his various surrogate family members and friends held just as much weight as his triumph over his foes. And while Gail Simone is more closely associated with the Birds of Prey, Dixon was the first to popularize the all-female superhero team in a way that wasn’t primarily for the male gaze. From his most popular and longstanding work in the DC Universe alone, you would not immediately guess Dixon is an outspoken social conservative.

This weekend, Dixon and artist Paul Rivoche (whose graphic novel adaptation of a popular conservative reading of the Great Depression hit shelves in the last month) published a post on the Wall Street Journal‘s opinion section bemoaning the predominantly liberal bias of modern comics (as they see it). The piece also claims Dixon’s career dried up once he started to voice his political views in the workplace, and calls for conservative creators of all stripes to take up the torch and catch up to the left wing in their dominance of the market. I think.

The essay also has a healthy dose of the “won’t somebody think of the children” argument, claiming we should eliminate politics from superhero comics because they are aimed at impressionable minds.

Our fear is that today’s young comic-book readers are being ill-served by a medium that often presents heroes as morally compromised or no different from the criminals they battle. With the rise of moral relativism, “truth, justice and the American way” have lost their meaning.

I can agree with Dixon on the fact that kids are ill-served by the superhero medium. Take, for example, DC offering an issue full of gore and violence for Free Comic Book Day, the most kid-oriented date on the comics publishing calendar. Superhero comics simply aren’t targeted at children any more (much to the annoyance to a number of geek parents I know, who’d really like to be able to share a Superman comic written within the last year with their tiny offspring), and they haven’t been since before Dixon started working on them.

Dixon and Rivoche acknowledge this when they talk about the rise in anti-hero comics of the nineties and the subsequent effect of that change on classic characters like Batman and Superman. Conveniently, they do this without mentioning the contributions of Frank Miller, another very outspoken right-wing comics pro, to the beginnings of that trend with his work on The Dark Knight Returns, and lay the source of all this “moral relativism” at the feet of liberal politics. Dixon claims that this bend towards liberal politics in comics lost him jobs:

[In the 1990s, Chuck Dixon] expressed the opinion that a frank story line about AIDS was not right for comics marketed to children. His editors rejected the idea and asked him to apologize to colleagues for even expressing it. Soon enough, Chuck got less work.

This description raises more questions than it answers. Millions of people live with AIDS every day. What is so political about their lives that a frank and honest depiction of their disease can not be made appropriate for children? Except, of course, that AIDS has long been associated, sometimes exclusively, with the gay community, and we all know that Superman can romance Lois Lane as much as he wants, and Bruce Wayne can date every socialite in Gotham, but homosexual relationships are inappropriate for children. Ultimately, at the end of the piece, Dixon and Rivoche’s call is not for less political subjects in comics to make them more kid friendly, but for more, different politics in comics. “We hope conservatives,” they say, “free-marketeers and, yes, free-speech liberals will join us. It’s time to take back comics.”

Even if I agreed with Dixon and Revoche politically, their arguments are fundamentally unsound in a number of places. For example, the two spend some time establishing the clear good guys vs. bad guys origins of Superman stories, bringing up the 1946 radio serial in which Superman battled the Ku Klux Klan, at the time a pretty gutsy thing for a fictional hero to do. But what they don’t mention is that nearly a decade earlier when his very first comics stories were being published, at the height of the great depression, Superman was often pitted (as he is today) against corrupt fatcats, or shown fighting on the side of every day workers and laborers. They claim that “comics were a brotherhood beyond politics,” but the truth is, at their least regulated, superhero comics (not to mention the Underground Comix movement) have always often skewed towards liberal politics, being created very consistently by writers and artists who had grown up in underprivileged urban or suburban areas and were still (due to the usual work-for-hire relationships they held with publishers) living and working on low wages and in diverse urban settings. 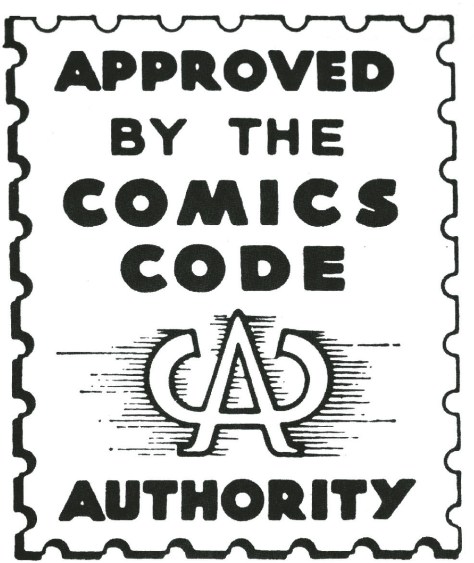 Perhaps the most laughable point Dixon and Rivoche attempt to make is to hark back to the “good old days” in which American comics content was governed by the in-industry censorship system known as the Comics Code Authority, which was honestly and altruistically created “to protect the industry’s main audience—kids—from story lines that might glorify violent crime, drug use or other illicit behavior.”

The CCA was created in the wake of 1954 senate hearings which sought to determine whether there was a demonstrable link between comics and juvenile delinquency. Those hearings would eventually find no link, but before they could be concluded, the fear of government censorship motivated a number of the comics industry’s biggest publishers to create their own censorship body. You can read the original Code as it stood for decades here. And when its rules were ratified, they were crafted in such a way as to nearly destroy the business of competing publishers who were pushed out of the rules making process, primarily EC Comics, creators of Mad Magazine and Tales from the Crypt. The code wasn’t written up “for the children,” it was written up to appease the U.S. Senate, with a side order of eliminating the most successful comics publisher on the market. And the effect of the comics code on stories, well… if you’ve ever wondered what on earth happened to comics in the 1950s and 60s which made sites like Superdickery.com possible? It was restrictive rules of the Comics Code.

You can read the whole piece behind the Wall Street Journal’s paywall here, (or cached here). It’s an odd piece from top to bottom, not withstanding the contradiction in simultaneously celebrating the potential to find libertarian and Randian philosophy in recent superhero stories (they cite both The Incredibles and X-Men) and bemoaning a short story in a single 2011 issue in which Superman renounces his American citizenship so that his deeds as the world’s most powerful man won’t be constrained by association with the U.S. government (the story in question was rendered out-of-canon by the New 52 reboot a mere five months later). Or, the sort of limited perspective that could take a book like Persepolis and say that it cannot “be called left- or right-wing.” Of course Persepolis contains a political message, it just does so in the context of Iranian politics, in which it is an incandescently radical leftist work, the very existence of which may well prevent its creator from ever seeing her home country again.

Dixon is fully free to champion the cause of his political leanings in comics, and, frankly, I’m much more interested in reading comics about conservative ideals from a conservative who has demonstrated he’s fully capable of exempting his personal views from a story where they conflict with the spirit of a longstanding character. But I think it’s worth pointing out that a number of the claims Dixon and Rivoche make in the article about the arc of politics in comics history are, frankly, bunk.