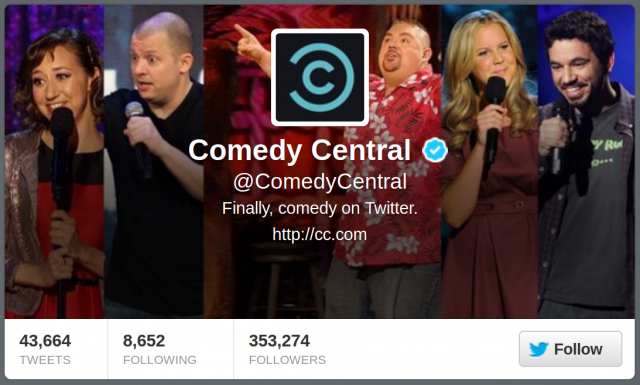 My Twitter feed is a pretty even balance between news sources I trust and comedians I enjoy, but next week it’s probably going to lean heavily to the comedy side of things. That’s because Comedy Central is hosting a comedy festival on Twitter by having comedians post jokes with the hashtag #ComedyFest and upload short clips to Vine.

The festival officially kicks off on April 29th, but it looks like the #ComedyFest hashtag is already getting some use. On the 29th, Comedy Central will host an event at the Paley Center for Media in Los Angeles where director Judd Apatow will talk to comedy legends Mel Brooks and Carl Reiner. During the event, Apatow will try to convince Brooks to join Twitter. This will be the only event of the festival to have an audience present, but it will also be streamed online.

Another highlight of the festival will probably be Tuesday, April 30th when comedian Steve Agee will post Vines telling six-second stories. The event is being called a “Vine Dining” party, and Agee is probably the best at Vine out of everyone on Vine.

Right now #ComedyFest is being used mostly by people like me posting links to articles about the event, but soon it will be filled with people telling jokes. What Comedy Central might not be counting on is that hashtags are open to everyone, so finding official content from them by searching for #ComedyFest could turn up unwanted results. Anyone can post something with #ComedyFest, and I do mean anyone.

My wife and I adopted a dog recently. We’d been trying to have one naturally for years. #ComedyFest

Who are you looking forward to seeing as part of the #ComedyFest?