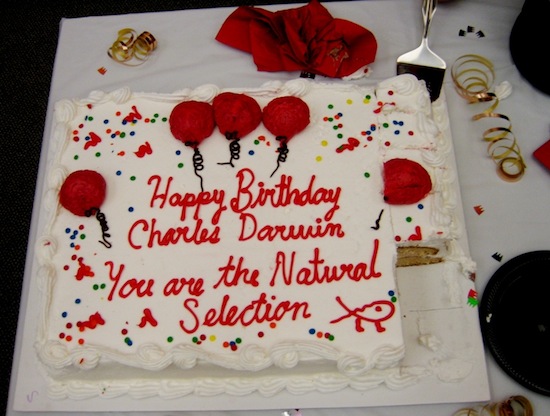 Happy Darwin Day, everyone! OK, we know it’s a relatively new thing and still catching on, but we are big fans of celebrating the February 12 birthday of naturalist Charles Darwin. It’s a day to be thankful for innovative thinkers, brave scientists of all stripes, and yes, evolution in general, because frankly, we take our opposable thumbs for granted 364 days of the year, and respect should be paid.

If you’re looking for something to do in your neck of the woods to celebrate among like-minded lovers of evolution, the International Darwin Day Foundation has a guide to events at colleges, libraries and museums around the world that will be celebrating the life and work of Charles Darwin in the coming days.

Then again, there’s a strong argument for celebrating Darwin Day like an academic, poring over old tomes, decoding margin notes and taking a scholarly approach to the celebration. While it doesn’t necessarily sound like our idea of a great time, we think Darwin would approve. He’d probably be especially flattered if you went to the Biodiversity Heritage Library to look through digitized versions of the books that made up Darwin’s extensive library, complete with a guide to notes in each one made by the godfather of evolution himself.

For our part, we’re just going to really concentrate on evolving all day. Maybe get us a sixth finger, or some gills. We’ve always wanted gills. Then again, maybe our day would be better spent actually learning about how evolution works. Take it away, Richard Dawkins!