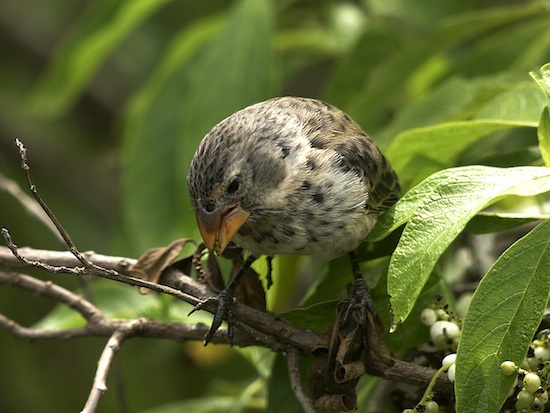 Scientists have sequenced the genome of the medium ground finch, marking the unassuming bird’s second contribution to the wonderful world of science. The first? This finch (geospiza fortis) is one of Darwin’s Finches, one of many varieties of finch species studied by the revered naturalist on his trip to the Galapagos Islands, where he laid the groundwork for his theory of evolution. Its contributions to evolutionary science may not be over, as researchers hope to use their new insights to the finch genome as a tool to explore evolution in real time. Though it does occur to us that this seems like a lot of responsibility to lay at the feet of a tiny bird that probably just wants to eat seeds all day. We promise, though, medium ground finch, after that you can hit the showers. Good hustle, get some rest.

The genome was sequenced by researchers at the University of California Santa Cruz as part of the Genome 10K project. In collaboration with the Beijing Genomics Institute, the project aims to sequence the full genomes of 10,000 vertebrate species in order to improve understanding of similarities and differences in genomes across genus by creating a genomic zoo.

In addition to studying the general biology of trait evolution, the newly sequenced genome could be put to use in studying how birds learn to vocalize, an area of study previously limited to the already-sequenced zebra finch. And lets face it — this is also just a really nice symbolic reminder and recognition of how much these small birds and one English gentleman scientist did for science. Respect.

The genome will be available to anyone who wants to give it a look on the Internet through the UCSC Genome Browser, though it will probably only make sense to people who, y’know, understand genomics. However, if you have a merely passing interest in looking at the genetic instruction manual for how to build a medium ground finch, it’s there for you as well. Best of luck.