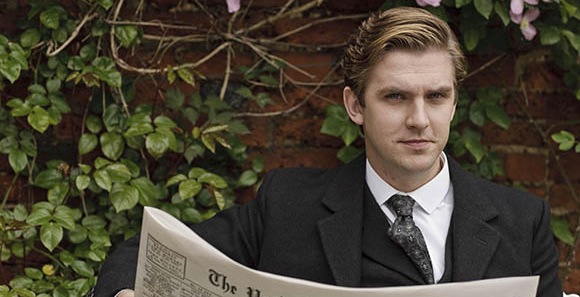 That WikiLeaks movie just got über-British. Variety reports that Dan Stevens, best known for playing Matthew Crawley in Downton Abbey, might be taking his acting talents and supernaturally perfect hair to star alongside Benedict Cumberbatch in the yet-unnamed film about WikiLeaks founder Julian Assange.

Stevens has been in a few films already, among them Clueless director Amy Heckerling‘s Vamps. (In an interview on this very site Heckerling has some very good things to say about the actor.) He’s also co-starring in the upcoming indie flick Summer in February (“A true tale of love, liberty and scandal amongst the Edwardian artists’ colony in Cornwall,” ooh la la) with Dominic Cooper and Emily Browning.

But back to WikiLeaks. Stevens is apparently in talks to play a hacker friend of WikiLeaks spokesman Daniel Domscheit-Berg (played by Inglorious Basterds‘ Daniel Brühl) who comes to work for the site. Also in the film is Alicia Vikander (Anna Karenina) and, of course, Cumberbatch, who is playing Assange. It’s being directed by Bill Condon (Dreamgirls, Gods and Monsters, Breaking Dawn Parts 1 & 2).

Could this be the thing that gets me to stop thinking of Stevens as something other than “That guy who plays Cousin Matthew and also has really great hair?” We shall see.

Edit: According to The Film Stage this movie now has a title: The Man Who Sold the World. Now I can stop referring to it as “that WikiLeaks movie.” Yay!