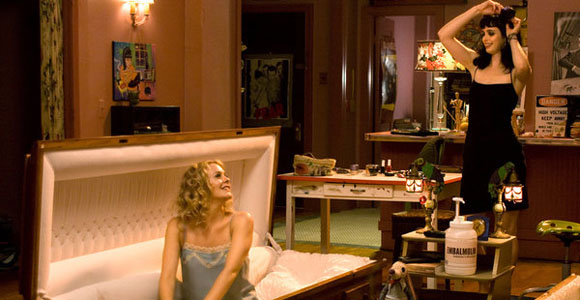 Vamps is the new horror comedy that reunites the dream team of director Amy Heckerling and actress Alicia Silverstone. It’s on blu-ray and DVD today and The Mary Sue had the opportunity of speaking with the director about the film, her past work, and the industry.

Vamps tells the story of Goody (Silverstone), a woman who was turned into a vampire in 1841 by a “stem vampire” named Ciccerus, played by the ever-awesome Sigourney Weaver. Considering how much vampire projects are around these days, we asked Heckerling why she wanted to jump in.

“Twilight is supposed to be the sexy good guy? You know, vampires are the good guys and there’s bad other people or something? Bad vampires and good vampires? I don’t know,” said Heckerling, adding that she appreciates when things come from a different perspective. “In Close Encounters, after tons of outer space guys coming down and destroying the Earth, suddenly an outer space guy comes, they come down and you go, ‘oh, they’re nice, let’s go over and see what’s going on with them.’ And then taking it further to E.T., it’s like, what if the outer space guys were nice,” she said. “I need to play around with the parameters of being a vampire and have fun with it the way I see it.”

It was that same kind of thinking that created Clueless. “When they said, ‘we want you to do a TV show about the cool kids,’ and I said, well, ok but I wanted to do something different, not like, ‘wait there’s this wonderful person who’s not accepted by the cool kids.’ which is the normal way they would do it,” she said. “But what if the cool kids where the nice kids in an alternate universe? And there was Clueless.”

Speaking of which, the directed also added Wallace Shawn (Mr. Hall) to the cast who she says is one of her best friends. The same can be said about Silverstone. Heckerling said, “We’ve been friends throughout the years so it wasn’t like, oh, once upon a time I worked with them and then I called them up a long time later and said well, let’s work again. It was an ongoing thing, I mean, I love Alicia. I saw her last night in her play and we hung out and she’s just one of my favorite people, so it was very organic.”

The Vamps cast also includes Krysten Ritter and Dan Stevens, who actors Heckerling was excited to work with.

“She is a total girl of this moment,” she said of Ritter. “I mean, she’s just happy, and she’s always attached at the hip to whatever social media is the latest thing and she’s constantly putting it out there to everybody in the world.”

Heckerling was aware of Stevens before Downton Abbey exploded into popularity. “I did a movie in England called I Could Never Be Your Woman and one of the shows that was on TV at the time was The Line of Beauty and Dan Stevens was in it. And I thought, ‘Who is this guy? He’s great, I love him!'” she said. She immediately contacted his people and went to see him in a play on the East End. “And he told me Downton Abbey was going to be coming out but I always wanted to work with him again. And when I wrote the movie I was hoping that he would be available but he wasn’t, and then it got pushed back and he was! And we were off and running from then.”

Considering what we do here, we felt obliged to ask Heckerling if she thinks the industry reaction to women has changed since the days of Fast Times at Ridgemont High.

“What’s interesting is in repressed countries where women are rising up and making their own stories, but as far as statistics from the DGA, I don’t know if they’re much better now than they were twenty years ago,” she said. “In television certainly you see a lot of women who are stars but that also have the power to create their own material and produce. That’s great.”

Though for women trying to pursue careers in the creative field, Heckerling says she has sympathy. “It’s a hard world, you know, it’s hard out there sometimes. It’s very, as I’m sure they all know, it’s a rotten job market,” she said. “You can, by yourself, put together and entire series on your computer but that doesn’t mean that you’ll make a living from it. And so there’s more competition because there’s more people who can do stuff, there’s less money to be made, and the way to rise up from the bottom is not the way it was. What I was able to do is not having anything to do with how somebody would go about it today.”

But that won’t stop Heckerling’s own daughter from trying. “My daughter wrote all these sketches and built these puppets with moving parts and she’s downstairs shooting with her friends,” she said, “and I know that all around the country there’s tons of women making their own projects in a doityourself kind of way.”

Vamps is in stores now.