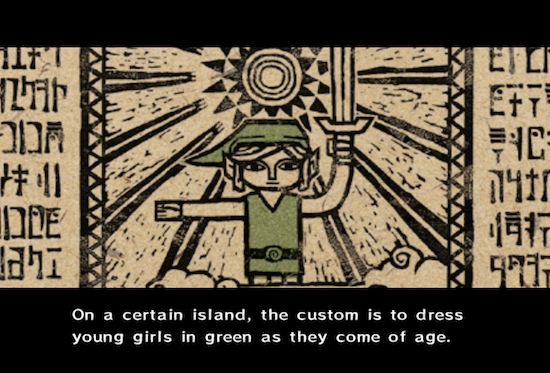 Parents will do anything for their children. Case in point: When father/gamer Mike Hoye plays The Legend of Zelda: Wind Waker with his daughter, he reads her the story. When he does, he changes all the pronouns so that Link is actually a little girl, and Zelda is her little brother. Why does he do it? In a world where most of gaming classic heroes are men trying to a damsel in distress, Mr. Hoye wants his daughter to grow up thinking that girls can be just as heroic as boys. After doing this for some time, Hoye got fed up with having to do all the work in his head, so he took the time to reprogram the game with his own gender-swapped version of the script.

Since the Hoye family was already playing an emulated version of the game on their PC, it wasn’t incredibly difficult for Mike to get access to the game’s code so he could work his magic. Still, it takes a lot of time, patience, and programming know-how to do change every reference to Link and Zelda’s gender. From a writer’s perspective, for instance, it’s not as easy as just flipping all the pronouns. Writing on blog, Hoye conceded that he had to get a bit creative with changing words like like “swordsman” and “milady.”

If you’re interested, Mr. Hoye has made his labor of love available on his blog. Inserting the new code isn’t easy: You need to make sure you’re using the right emulator, (Dolphin) the right type of game file, (.GCM) and you’ll need to write a patch to change to the game. If you’re willing to do the work though, you’ll get access a unique version of the Zelda experience. More to the point, if you’re a parent whose concerned about gender stereotyping in media, this is a chance to break the mold.