You Can See Curiosity’s Tracks On Mars From Orbit

See that newly formed set of tracks in Mars’ Gale Crater? Those are the tracks left behind by the Curiosity rover (oh, God, we hope), which can apparently be seen from orbit. Well, from orbit around Mars and with about a bazillion dollars worth of camera equipment, we mean. Still, it’s pretty cool to see the Mars Reconnaissance Orbiter’s latest shot of the rover’s… rovings, I guess? It’s good to know that there’s a backup plan in place on the chance that NASA loses contact with the rover, even if being able to see where it’s tracks suddenly end seems like a pretty low-tech solution to a potential problem. Keep reading for a bigger photo with more Mars goodness. 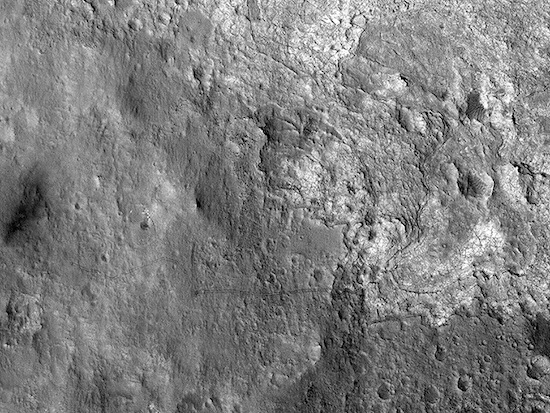 It’s not that Curiosity is leaving particularly enormous tracks behind or anything. The rover is only about the size of an SUV, after all. The surface of Mars just isn’t bustling with activity — much to our disappointment — so any new track left in the dust sticks out like a sore thumb.

The images are also a clear testament to the awesomeness of the MRO. Curiosity gets a lot of press these days, and not without cause — when you’re zapping rocks on a foreign planet with laser blasts or preparing to drill into them, you’re doing work people are going to be interested in. Curiosity isn’t the only piece of impressive tech with an eye to learning more about Mars these days, though.

The Orbiter is doing lots of impressive work from orbit — like discovering that it snows dry ice on Mars. Meanwhile, Curiosity’s predecesor,  NASA’s own Opportunity rover, is still chugging away and sending back data to mission control, having outlived its predicted lifespan by more than eight years and counting.