The Curiosity Rover is [Sort Of] Marching in the Inauguration Parade 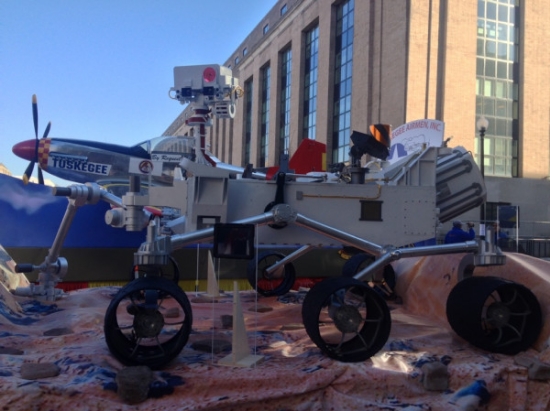 The real Curiosity rover may be millions of miles away on the surface of Mars, but that won’t stop NASA from sending in a look-alike to march in today’s Presidential Inauguration Parade to ring in President Barack Obama’s second term. Curiosity just tweeted this picture of its twin getting ready to join the festivities.

The stand in for Curiosity will be joined members of the Jet Propulsion Labratory and NASA according to this tweet:

My double is ready to roll in #inaug2013 parade with @nasa & @nasajpl mission team members.twitpic.com/bx6jbu

This is a much better showing by Curiosity than it’s hyped-but-disappointing New Year’s message to the folks in Times Square, and hopefully it’s a sign of the administration’s interest in NASA and missions like the Curiosity rover.

We’re not sure how fast the parade will be moving, but we’re willing to bet the replica rover will be marching along a lot faster than the 1.5 inches per second top speed of the real Curiosity rover. The parade would last forever if they had to wait for the real Curiosity.