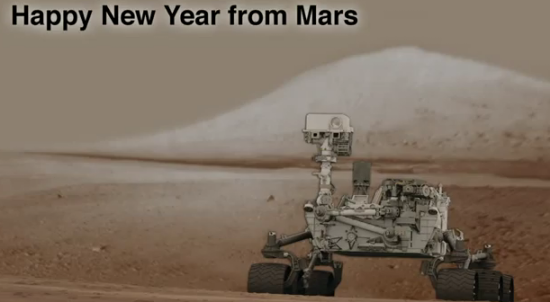 This might sound like a spoiled rich kid complaining they asked for a Ferrari for their birthday but got a Lamborghini instead, but when NASA’s Curiosity rover tweeted that it would have a special New Year’s message for the people gathered in Times Square last night, I thought it would be more… special? It was nice of NASA to send a message at all, but I hope the message Curiosity sends me for my birthday is better– and that it’s a Lamborghini.

I know Curiosity is busy with things like searching for signs of microbial life on another planet that’s 206 million miles away and all, but it did promise a “special” message in this tweet:

Will you be in @timessquarenyc for New Year’s Eve? Look for a special message from Mars on the giant Toshiba screens.

Not that it had to be news that they’ve found life on Mars to get me excited, but something like a new image instead of just some text laid over Curiosity’s selfie from November would have been nice. Although since the initial audience for this video was the one million people in Times Square waiting to watch PSY perform “Gangnam Style” for the last time in North America, it might not have been the best opportunity to release anything too interesting after all. Check out the video message and decide for yourself. Did Curiosity disappoint?

To be perfectly honest, the fact that there’s a robot launched from Earth that is roving around Mars and sending back pictures and data at all is really something special, and I’m looking forward to seeing what it does in 2013. Curiosity has already tweeted about it’s plans for the new year:

What are your goals for 2013? I’m looking forward to using my drill & driving to Mars’ Mount Sharp #DareMightyThings