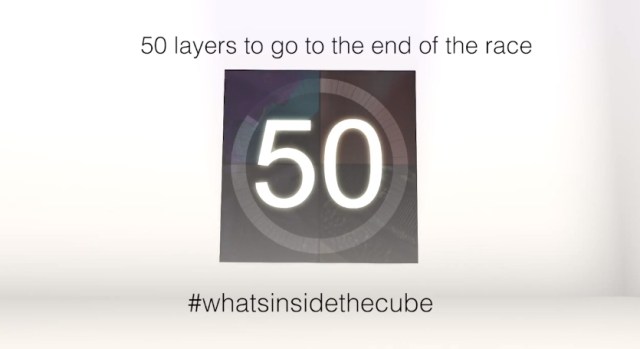 Anyone that’s spent any time following video game development knows that Peter Molyneux, currently of 22Cans, loves to make big promises. He’s pretty much incapable of reining in his hopes and dreams. It makes him a lovable bastion of ambition to some, but it also makes him a poster child of unmet expectations. It’s been announced that his Curiosity — What’s Inside the Cube? experiment will be ending early, so prepare for some minor Internet upheaval.

It’s not like folks should have expected any less. Given the flowery language Molyneux is prone to using, it’s only natural to temper expectations a bit. Then again, Molyneux’s cutting his “multiplayer social experiment” incredibly short — less than half of the original cube has been chipped away since the game launched in November, according to Wired.

Curiosity, which was made available on iOS and Android, essentially tasked players with working together and destroy layers upon layers to get to the very core of a giant cube.  Molyneux has said multiple times that secret held within would be “life-changing.” We’ll likely see if this holds true sooner rather than later. According to IGN, internal predictions at 22Cans has the cube opened up the morning on May 21st — the same day as the next-gen Xbox reveal.

There’s only 50 layers left thanks to Molyneux’s tinkering, so there’s really no time like to present to start destroying cubelets.