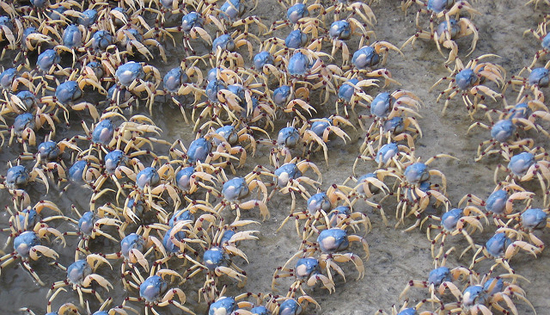 In the 1980s, Edward Fredkin and Tommaso Toffoli proposed a computer based on Newtonian dynamics. In their computer, billiard balls would roll around in a theoretical environment without friction and bounce off certain walls in perfect timing. They would then pass through a series of gates that, depending on velocity of the balls, would process as different functions. Now fast forward to the modern day and replace “billiard balls” with “soldier crabs” and “theoretical environment” with “Japan.”

Computer scientists at Kobe University in Japan have recreated the billiard ball computer in great detail with one major change: Live soldier crabs now take the place of the billiard balls. First they developed a computer model of a model computer run by crabs, and then they actually built the thing.

Based on the way in which soldier crabs swarm, scientists recreated nearly identical results to the proposed computer by casting a facsimile of a bird’s shadow so that the crabs keep moving as they believe they’re about to be eaten. You see, when two crab swarms collide, they appear to then move as one in the direction that is the sum of the original two swarms’ velocities. This makes their movements predictable in fascinating ways.

By creating a specialized series of channels — and with generous use of the shadow being cast — researchers found that they could get the crabs to operate both an “OR” and “AND” logic gate. The OR gate, which only had two swarms coming together correctly, functioned with quite a bit more reliability than the AND gate, which is not surprising considering the AND gate required the swarms to follow one of three correct paths.

Perhaps if they weren’t crafting a computer by making crabs think they were about to be eaten by some hungry bird, they might get better results.