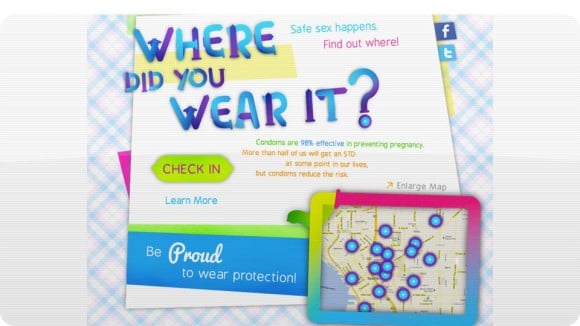 A regional chapter of Planned Parenthood, god bless them, is running a promotion that asks responsible young men to “check in” on Foursquare every time they practice safe sex, so they can proclaim, “I am wrapped up and proud!” But, um, what about the people with whom these fine young men are practicing the safe sex? I guess “a gentleman never kisses and tells” is not a thing anymore?

Look, this is a perfectly well-intentioned thing that Planned Parenthood of the Great Northwest is doing here, combining our beloved culture of oversharing and QR codes with making smart decisions for one’s sexual health and that of their sexual partners. This is so appropriate, especially since we all just learned this morning that men are more likely to post things they regret on social networking sites. Now men have a reason to post on yet another social network that they are having sex with another person while giving an actual location, and perhaps even tagging their sexual partners.

So, now we’re wondering how those sexual partners might feel about this. And what that conversation entails:

Person 1 (clicking away on smartphone): That was great, baby. You’re amazing.

Person 2: Thanks … What are you doing there?

Person 1: Oh, nothing. My friend texted me.

Person 2: Oh, good. I thought for a second there you were telling everyone on Foursquare, Facebook, and Twitter that we just had sex with a condom.

Person 2: You know I’ll be able to actually check this, right?

While it’s true that both men and women are considered “users” of condoms to protect themselves from pregnancy and disease, the site, WhereDidYouWearIt.com, is clearly geared towards the menfolk, with the sentence “You should be proud to wear protection.” And their message is great! It totally is! Like Planned Parenthood, we strongly encourage guys to use condoms and to not think of them as something that lessens the pleasure and joy of sex. Because “pleasure and joy” are generally not part of the conversations people have about unwanted pregnancies and STDs.

But this Foursquare thing? Kinda not cool. They do say that the exact location of your “special spot” will not be revealed, that it’ll just be in the general area; the field where the information is provided asks for an “approximate address,” and next to that is the promise that they “generate a location close by in the neighborhood.” But still! We’re not exactly “angry” or anything, but this is a little off-putting. As in, that kind of information should be “put off” of a social network. That doesn’t really work, but anyway …

We’re psyched that guys use condoms when they have sex. We’re happy for the people who are having the sex, especially if it’s safe and responsible and fun! But trust me when I tell you, no one wants to think about your now-used penis protection while on the internet, especially the person you used it with.

I’m almost certain I’m not the only one who finds this weird. But if I am, I guess I’ll just go clutch some pearls.

Update: Program creator Franz Maruna dropped into the comments to offer some clarification. We’re gonna post his remarks here so you don’t have to go looking for them.

Thanks for the article! As the guy who actually built this, I thought I should clarify a few points:
1) it has nothing to do with foursquare. Nothing. Not used at all. It is entirely its own site. 2) it really does generalize your location. We’re not lying. We send whatever you put in the location field to google, we get back some geolocation data, we add some random numbers to it – THAT’s what we store. 3) Its completely anonymous. There’s no accounts, we never ask for an email, we don’t let you make comments. It’s not a scoreboard. It’s a map of locations with generalized data. There’s nothing you can enter that will associate him with her.

thanks again for the attention, just wanted to clarify those issues as they seemed important.

Thanks for the info, Mr. Maruna!