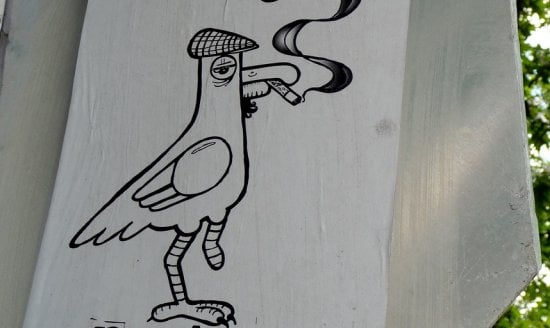 No one likes seeing cigarette butts strewn about city streets. No one, that is, except maybe urban birds. New research shows bird nests that incorporated cigarette butts may be repelling unwanted parasites. It turns out the deadly chemicals contained in cigarettes may provide a useful service for birds. Based on known bird behaviors, it’s also possible that birds are seeking out cigarette butts to put in their nests to repel pests.

Some species of birds have used materials such as fragrant plants in a process known as self-medication that is either meant to repel parasites or boost the immune systems of the birds in the nest. The nicotine and other chemicals left behind in the cellulose of the discarded cigarette butts probably have a better chance at repelling insects than increasing anyone’s immune system. Nicotine is a known antiherbivore chemical, and the birds could be seeking out used cigarette butts to use for that purpose.

This is a great example of a species making use of something from human society, but please don’t take it as an excuse to leave your filthy cigarette butts on the street. Please.

(via Biology Letters, image via liquidnight)