Knock it Off, Humans! Your Behavior Freaks Out Elk 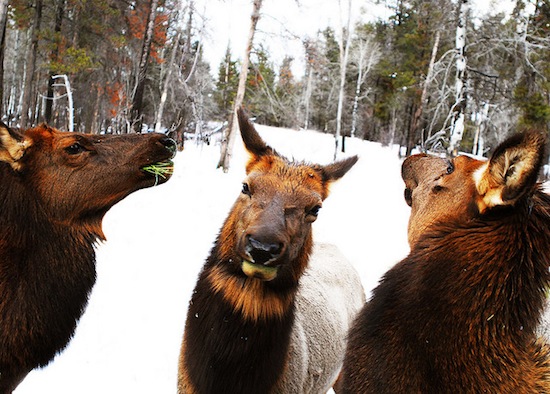 Oh, humanity, you’re a real piece of work. When we’re not callously wiping out an entire species of animal through overhunting or habitat destruction, it turns out we’re scaring the living daylights out of them. During a year-long study of elk in southwestern Alberta, a research party led by Simone Ciuti of the University of Alberta noticed that the presence of humans left the elk more on edge than the presence of their natural predators, like bears and wolves. The elk seemed particularly put off by humans in vehicles, though it seems fair to assume that bears and wolves driving ATVs would have left them equally unnerved.

The elk herd involved in the study were primarily female and traveling with their young, and  the constant presence of vehicle traffic — researchers had a vehicle drive past one particular herd every two hours — had a noticeable effect on their calf rearing and general health. Though the human/elk interaction was by and large minimal, it nevertheless made the animals tense and alert, resulting in constant watch taking precedence over foraging for food.

The study also showed that the different types of land had different impacts on the elks’ behavior when confronted with humans. Remote areas known for hunting and the use of all-terrain vehicles meant elk that were more tense than elsewhere. On the other hand, elk that resided in areas where human interaction is the norm displayed virtually no sign of paranoia, even during the summer tourist seasons when people (and their accompanying pic-a-nic baskets) become much more common.

Results of the study suggest that it’s not the number of humans present, but rather the type of activities they engage in that leave elk in the area feeling uneasy. What can we learn from this? Elk don’t appreciate the unbridled joy of doing donuts in an ATV. That’s what separates man from the animals.