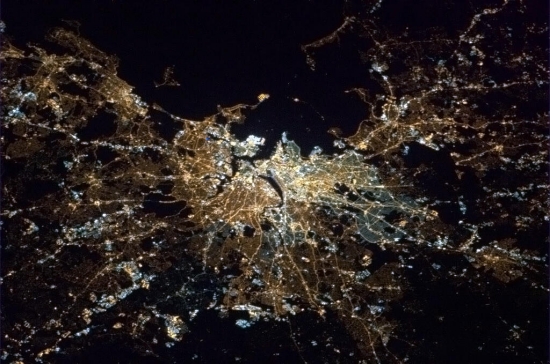 Tonight is the seventh annual Earth Hour, an event that encourages people to power down for an hour as a symbolic gesture to promote awareness about climate change. The event kicks off at 8:30 p.m. and to make sure everyone knows about it, International Space Station Commander Chris Hadfield is tweeting pictures of cities lit up at night.

The purpose of Earth Hour is for everything to go dark for an hour. Obviously it’s not a 100% blackout like in Revolution (which I just started watching yesterday) but there should be a noticeable difference if enough people participate.

What better vantage point for seeing cities go dark at night than the International Space Station? That’s why Commander Hadfield announced he’d be taking pictures of the darkened cities to show off everyone’s efforts:

It would have been great to see the space-eye view of some partially blacked out cities, but it looks like physics had something else in mind:

As it turns out, orbital mechanics don’t support seeing lights out efforts. But a richness of “before” night photos coming for inspiration. — Chris Hadfield (@Cmdr_Hadfield) March 23, 2013

We’re not sure exactly what the issue is, but at least Hadfield isn’t one to just give up. Even though he can’t share photographs of darkened cities, he’s still sharing some lit up ones as “inspiration.” Here’s Boston:

Boston, Massachusetts. Everyone down there prepared to shine a little less brightly for an hour? twitter.com/Cmdr_Hadfield/…

Hey! I think I can see PAX East from here! If Boston doesn’t interest you, check out Pittsburgh:

Pittsburgh, Pennsylvania, with the lights of the city piercing through the clouds. twitter.com/Cmdr_Hadfield/… — Chris Hadfield (@Cmdr_Hadfield) March 23, 2013

With the blur of the cloud cover this almost looks like a galaxy.

I’m trying to see if I can find the Geekosystem office in this photo of New York City:

New York City, lit up like a bulb. The Statue of Liberty is clearly visible in the night from above. twitter.com/Cmdr_Hadfield/…

These are the only three pictures up so far, but there are still a few hours left until Earth Hour, and Hadfield is nothing if not a prolific tweeter. Follow him @Cmdr_Hadfield to see all his space-tweets about Earth Hour and anything else going on above the world.