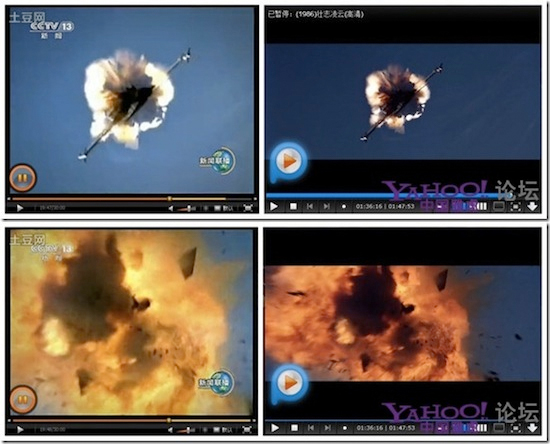 Chinese bloggers accused broadcaster News Broadcast (Xinwen lianbo) on Chinese Central Television for trying to pass off footage from the movie Top Gun (right) as footage from a recent air force training drill that took place on January 23 (left). The news segment was supposedly reporting that a target was hit by an air-to-air missile, causing the pictured explosion. As one may notice from looking at the juxtaposition of the screen captures, both scenes look nearly identical, right down to the pattern of the fire and placement of debris. I personally think News Broadcast should embrace this blunder, and only use scenes from famous movies, taking the stance that real life mirrors the movies so much, and there’s all kinds of lessons to be learned from them. Or something.