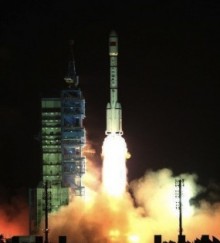 Back in October, China took its space operations to new heights by placing the Tiangong-1 space lab in orbit. Then, the Chinese space agency followed up that success by launching the unmanned Shenzhou-8 craft in November, which successfully docked with the Tiangong-1 station. Now, final preparations are underway for the country’s first manned mission to its space station, and the crew roster may for the first time include some women.

According to Xinhua, the spacecraft for the mission — Shenzhou-9 — has already been completed and mated with the Long March-2F rocket which will carry the three person crew to space. However, the crew of “taikonauts” still needs to be selected. The roster of candidates has been confirmed to include some women, and the entire slate of prospective taikonauts is currently training for the mission.

Though this could be a historic first for China’s space program, the final decision about the crew won’t come until later. Deputy head of the General Armament Department of the Chinese People’s Liberation Army and commander-in-chief of China’s maned space program Niu Hongguang told Xinhua that the final crew selection will be made, “on the very last condition.” Presumably meaning that we won’t know until immediately before the launch.

The launch is expected to occur sometime between June and August of this year.