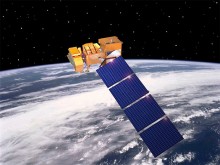 In 2007 and 2008, two U.S. satellites experienced strange interference on several occasions. The anomalies didn’t last, the longest period being just twelve minutes. However, a draft report from the U.S.-China Economic and Security Review Commission says that what the satellites experienced was an attempt to take control of the spacecraft by hackers on the ground, and names China as the most likely candidate.

The two satellites were Earth observing craft and were not involved in any national security operations. The first, the Landsat-7 satellite operated by the U.S. Geological Survey, encountered interference in October 2007 and June 2008. The second craft, the NASA operated Terra AM-1, had its bout of interference in June and October of 2008. The commission’s report claims that this interference was a failed attempt by a ground station to “lock on” to the satellite in order to send it commands. According to the report, the attack utilized the Svalbard Satellite Station in Spitsbergen, Norway.

While the claims made by the report are quite troubling in their own right, the report itself is disconcertingly short on information.In fact, the report says that although the attacks were not directly linked to China, “the techniques appear consistent with authoritative Chinese military writings.” That’s hardly damning evidence.

According to Reuters, the information regarding the alleged satellite hacking came from a single briefing from the Air Force to the committee. Given that the Air Force has become the defacto branch of the military that deals with space security, that should not too surprising. However, it does suggest that whatever information was shared between the Air Force and the Congressional commission will likely stay behind closed doors.

More troubling is the fact that the company which operates the remote Svalbard Satellite Station has no evidence that any such intrusion occurred. Again, from Reuters:

“Our systems indicated nothing,” Kongsberg Satellite Services President Rolf Skatteboe told Reuters in Oslo. “We don’t understand where this is coming from.”

This could mean that the company simply lacks the ability to detect such intrusions, or no such intrusion occurred. Neither bodes well.

It’s true that China has been focused on modernizing and improving its military capabilities, including obtaining the ability to project military force into space. However, the U.S. has also pursued such avenues in the past. Though we’ll likely never know the true origins of the satellite interference, this episode will surely be another chapter in the growing history of high-tech tensions between the U.S. and China.