Fake Concrete-Filled Walnuts For Sale In China | The Mary Sue 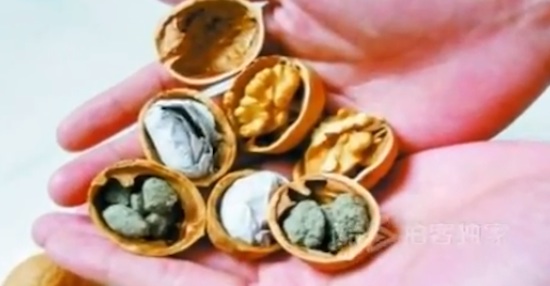 Chinese vendors are the place to go if you’re looking for counterfeit merchandise. The nation that practically invented the knockoff Coach bag has raised counterfeiting goods to a sublime art form, going so far as to open entirely fake Apple stores so convincing they fool even their own employees. The latest story of a fake product coming out of China, though, has left us too impressed to offer anything but a slow clap as at least one street vendor there has started selling fake walnuts — walnut shells with the nut taken out and replaced with a less tasty chunk of concrete.

While the fake is pretty well done and ingenious, it’s not the most complicated job in the world. The enterprising walnut salesman simply cracked open some of the nuts, removed the meat, and replaced it with a chunk of cement, sometimes wrapped in paper to deaden the sound of pebbles and rocks rattling around in a walnut shell. Then, the shell gets glued back together and returned to the bins, where it waits it’s turn to disappoint and freak out a customer.