Developer Outsources Own Job to China to Goof Off Online All Day, is Our Hero 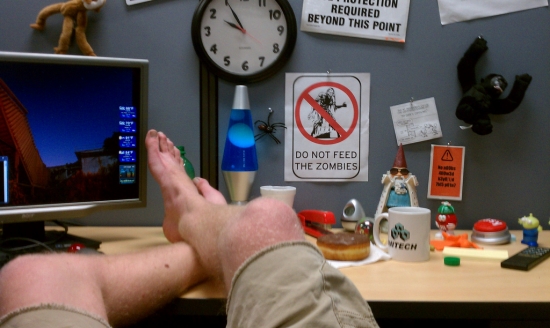 American companies outsource jobs to places like China because they can hire people to do the same jobs their employees do for less money. One developer’s job was outsourced last year, but it wasn’t by his company. He did it himself. Someone hired a company in China to do his job for him, and paid them a fraction of his salary. While his bosses thought he was working, he was just screwing around online. Is there a way to type out a slow clap? Because that’s what I’m giving this guy. Bravo, sir. Bravo.

The developer, identified only as “Bob” in a report, worked for a company that had a basic VPN system that used two-factor authentication to give employees the ability to work from home. Along with standard login information, employees had to enter a number produced by an RSA SecureID key fob to sign on and do their work. Bob simply mailed his fob to the company in China so they could log in as him to do his work for him.

In the time his bosses thought he was working, Bob spent time on Reddit watching cat videos, checked out eBay listings, and updated his Facebook and LinkedIn accounts. You know, things people normally do at work when they’re not working, but this was Bob’s whole day. He found a way to browse Reddit professionally. Bob is brilliant.

His bosses realized something was strange when they noticed all the logins coming from China. They came up with a very elaborate theory about what was happening involving malware initiating the VPN connection through a proxy that routed the traffic to China and back to the company. They didn’t consider that the simplest explanation — that someone was logging in as Bob from China — was the correct one.

The company asked Verizon, who handled their telecommunications services, to investigate, and they uncovered Bob’s brilliant scheme. They also found that not only was he outsourcing his job with the firm to China, but he even took additional developing jobs and outsourced them as well. He was earning hundreds of thousands of dollars a year, and only paying out about $50,000. All the while he was acing his performance reviews and was considered the best programmer in the building.

It doesn’t look like Bob’s employers share my admiration of his actions. He’s no longer employed by the company.

(via The Register, image via slworking2)