China Is Cloning All The “Cute Species,” Which Is Much Scarier Than It Sounds

Has nobody read Animal Farm? 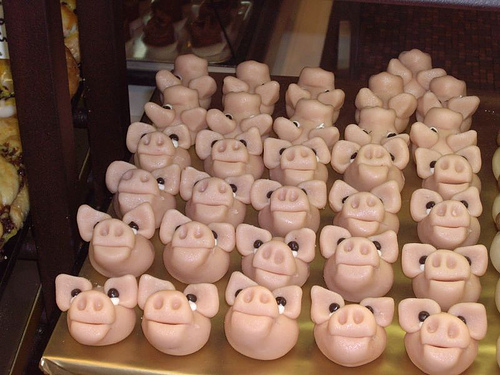 If you thought it would be years before “clone factories” existed outside of Star Wars prequels, you were wrong. A recent BBC report proves that industrial cloning is no longer just science fiction and that it’s about as scary as you would expect–especially if you’re a pig or something else adorable.

The clone factory in question is owned by BGI, a rapidly growing company that has a near monopoly on genome sequencing machines, owning over 156. Reporter David Shukman gained access to their pig-cloning factory in China and writes, “The technology involved is not particularly novel – but what is new is the application of mass production.”

BGI works around the clock  at an old shoe factory in Shenzhen to  clone around 500 pigs a year, which requires impregnating two sows with blastocysts (early stage embryos) a day.

This number is staggering, but it’s nothing compared to BGI’s long term ambitions-to sequence the genomes of a million people, a million animals, and a million plants.

Head BGI executive Wang Jun claims the desire to produce a consistent product is one motivation behind the rate of industry in Shenzhen, saying “If it tastes good you should sequence it. You should know what’s in the genes of that species.”

BGI also claims part of their aim in Shenzhen is to advance healthcare, since pigs and humans have similar genomes. BGI has been performing genetic experiments on their pig clones such as removing their growth genome so that they stop developing after one year (yes, sounds adorable, but still ethically ambiguous) and altering their genes to make them more vulnerable to Alzheimer’s (China, we saw Deep Blue Sea. Come on now.)

BGI’s other motivation for genome sequencing of specific species is what really takes the clone cake.

“If it looks cute – anything that looks cute: panda, polar bear, penguin, you should really sequence it – it’s like digitalising all the wonderful species.” As horribly cavalier as Jun sounds, it’s nice to think that if BGI is playing God, at least they’re a benevolent deity.

Although we’re glad to hear BGI doesn’t have plans for shark or bear cloning factories in the near future, that doesn’t mean we’re not going to have nightmares of dying in the panda and pig uprising. Advancements in food production and health are all very well, but we doubt Jun will be their to hold our hand when the miniature pigs return for revenge.