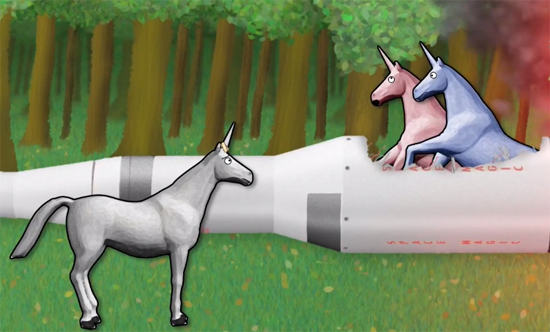 People, it just got real. There’s a new sequel to the classic Charlie the Unicorn! Jason Steele as in FilmCow as in SecretAgentBob as in the original creator of Charlie has finally provided a new installment titled “Charlie the Unicorn 4,” and it’s great. We’re not pulling your leg, and it’s not from the charlie teh unicron series. What we’re trying to say is: This is not a drill. There is a new Charlie the Unicorn.

Without spoiling too much, let’s just say that this particular Charlie the Unicorn episode unfolds much like previous ones, except they have to go to the Moon this time, because of course they have to go to the Moon. Even though it’s been something like three years since the last installment, it’s like Charlie never truly left us. The jokes feel right, and the animation is as amusingly terrible as always.

Plus, there’s a surprise cameo at the end from a previous installment. It might not make sense — like, any at all — but Charlie the Unicorn will always have a place in our hearts. The Internet wouldn’t be the same had he never visited Candy Mountain or been on a bridge. Even trying to imagine a world without those two scenes is painful.